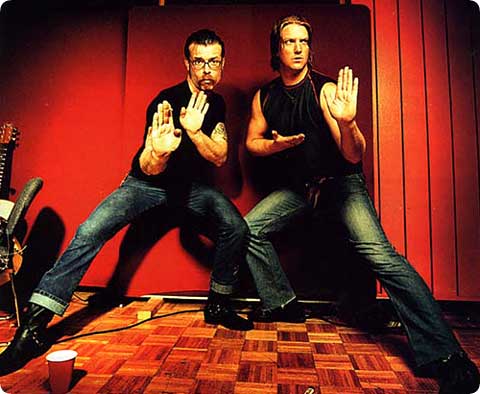 Whoa this some day for music folks! Members from Led Zeppelin, Foo Fighters and Queens of the Stone Age teamed up and are already working on a new album, and definitely not one to be snubbed. Although some speculations have been made for quite a while (perhaps with some small variations), this became official actually thanks to a ‘marital indiscretion’.

Yes, you can easily guess it’s Homme’s wife that leaked. Brody Dalle, also playing in a band called Spinnerette let the news leak out and she also pretty much summed up what it’s all about:

The still-nameless-uberband consisting of Led Zep bassist, QOTSA frontman and Nirvana drummer Foo fighters frontman is not a surprise, especially since Dave Grohl and Josh Homme played together for quite a while and they couldn’t pick up anybody better for this.

Also, John Paul Jones gave some hints on this:

“I’m working on some other music, which is more rock based, with a couple of other people,” he said. “We hope to be everywhere this summer.”

Only bad thing is that this is probably the last nail in the could-have-been Led Zep reunion, but I’d bet my AC/DC ticket that they’ll definitely TEAR IT UP!