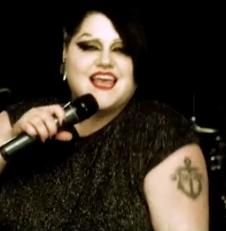 Beth Ditto really never ceases to amaze me with her apparent ever replenishing energy. Be it in the studio, on the stage or in a music video, she’s literally everywhere.

As it’s the case with most of The Gossip‘s video productions, there’s not really much to talk about the music video for the band’s latest single “Heavy Cross,” simply because it’s a tad difficult to understand it. Beth changes like 5 outfits, while the band plays in dark, but somewhat glamorous, environment. Typically new age disco stuff. Ha, Party like it’s 1999!

Heavy Cross is off The Gossip’s forth studio releae “Music For Men” out now via Columbia.