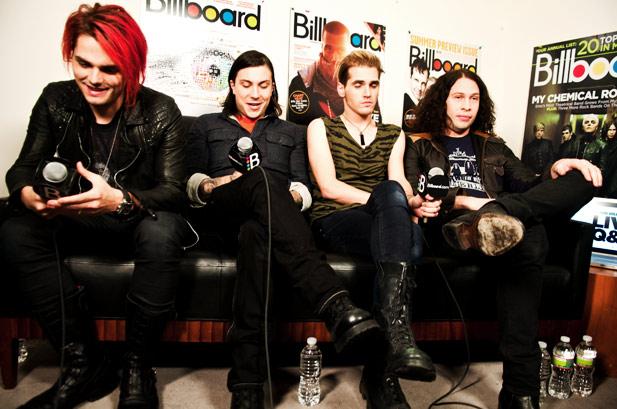 After 12 years and 4 studio albums, My Chemical Romance announce the end of the band, in a blog post.

It all started with some rumors, which were then denied, MCR claiming to be working on a new album, but now, this gets posted on their blog:

Being in this band for the past 12 years has been a true blessing. We’ve gotten to go places we never knew we would. We’ve been able to see and experience things we never imagined possible. We’ve shared the stage with people we admire, people we look up to, and best of all, our friends. And now, like all great things, it has come time for it to end. Thanks for all of your support, and for being part of the adventure.
My Chemical Romance

So that’s it… just like that. Their latest concert was a hometown gig — a May 19, 2012 show at New Jersey’s Bamboozle festival.

It all started in 2001, when visual artist Gerard Way — inspired by fellow Jersey band Thursday and spurred on by the 9/11 attack decided he had to get out of the basemenet and start doing something special. He recruited guitarist Ray Toro and his own younger brother Mikey to play bass. After that, Frank Iero joined after his band, Pencey Prep, broke up, and original drummer Matt Pelissier left the group after 2002’s I Brought You My Bullets, You Brought Me Your Love and 2004’s Three Cheers for Sweet Revenge, making way for Bob Bryar on 2006’s The Black Parade. The band started making a name for themselves from scratch, slowly becoming the idols of misfit youth, the voice of the unwanted teenagers, while also exploring concept albums filled with dramatic rock. Other than that… what can I really say …