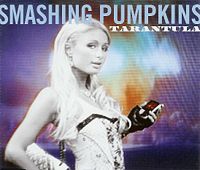 It seems every where i turn i can’t shake Billy Corgan, the man’s everywhere. This time he sheds some light on the much controversial Tarantula single cover, depicting Paris Hilton holding a BlackBerry with the Zeitgeist album cover on the screen, and a low-resolution image of a mushroom cloud in the background.  Here’s how Billy convinced the oh-so ‘popular’ Paris Hilton to pose for the cover: ( via Blabbermouth)

Actually the original idea was we were gonna see if Lindsey, Britney and Paris would all shoot. But ultimately we decided that that was probably gonna be too prohibitive ’cause then you would get into, like, those girls fighting amongst each other. Paris I knew personally, and hung out with her a few times, and so I asked her. I said, ‘Would you be willing to do this?’ And God bless her, she came, she showed up at 10:00 a.m. on a Sunday morning, sat in the chair, got made up and shot her. So anybody who thinks that those aren’t real photos, those are real. We took those photos.

Publicly admitting your friends with Paris ? Common Billy i thought you knew better then that, anyway everyday you remind me how low this reunion is .