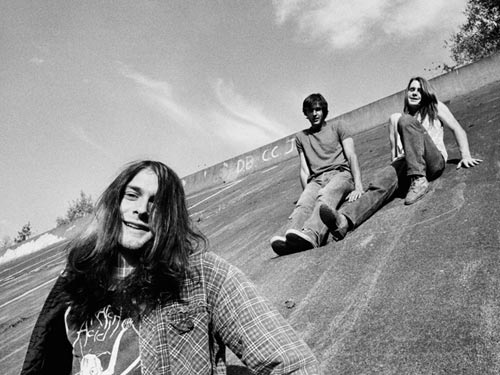 HOLY FUCK! The whole interwebs is packed with Nirvana all of a sudden, with every blog blogging  and every speaker popping over the band’s insane rocker “Scoff,” played live almost 20 years ago at the Pine Street Theater. The song was released yesterday for free by Sub-Pop, being featured on the upcoming re-master and expanded version of Bleach, as part of its 20th anniversary. This expanded CD/double-LP will include a never-before-released live performance (allegedly, the whole February 1990 Pine Street set will be there), special packaging (48-page CD/16-page LP booklets) and the first run of the double-LP will be on 180g white vinyl (the first run of the original LP was also on white vinyl). The re-release will be out November 3rd, 2009 – you can pre-order it at Sub Pop.

Worth noting is the incredible work producer Jack Endino (the original Bleach producer) put on this track, making it sound like if the band was right in front of us, playing a live gig. I don’t know about you, but I’ll just hit play and stare at the above photo for the next couple of hours. Good night!