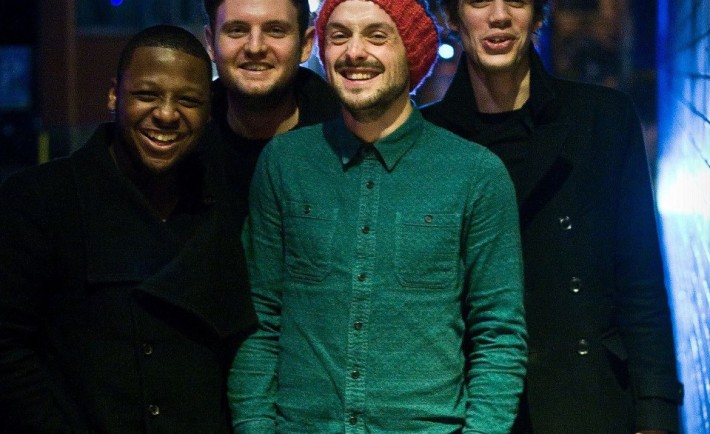 Leeds is a city with a vibrant music scene: buzzing sounds, great bands, and a community ethos. ZME chats to Happy Daggers about their home town and the music they make there. 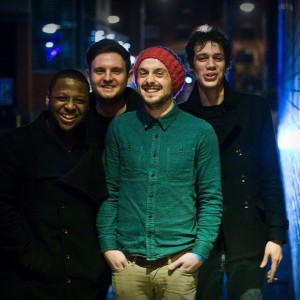 You have quite a mix of styles going on, yet all seem to blend well. Are there any particular influences?

We all have very eclectic tastes and I think that helps bring new ideas to the table and keep things fresh. I’d probably say indie, rock n roll, disco and soul are the main ingredients. We’re all really into anything as long as it has a good groove and isn’t too plastic and manufactured. We all love our classics and are probably more into music from the 60’s and 70’s than anything in the charts at the moment. Nights out as a band invariably end up somewhere that’s blasting out funk and soul until the wee small hours.

How do you write – do you find a riff and build it round that, and consciously add elements in?
It definitely varies. Sometimes it could start with a bass riff and everything else builds around it. Other times one of us might come to rehearsals with a verse or a chorus idea and we develop that. There’s certainly no particular formula and that’s how we like it. It generally happens very organically, sometimes by total freak accident.

Leeds is known for having a great music scene. Do you think that being in and around the area has helped the band and your music evolve?
Me (Jon – bass) and Tom (drums) met at University in York and moved to Leeds with our old band purely for the music scene. When that band fell apart we were introduced to Sinclair (vocals & guitar) and Danny (guitar) and things started from there – so Leeds has definitely helped our music, it’s where we started. It is a great scene with some fantastic bands and it just seems to be getting stronger all the time.

Where is your favourite venue in the area?
The 360 Club at The Library Pub in Hyde Park is a great night. Richard Watson,who runs it, is a brilliant promoter who has such a good thing going. The sound is impeccable and he really cares about the acts he puts on. He’s given us some really great advice and has always been really enthusiastic about what we do, from the very beginning.

Any bands you think are up and coming and worth checking out?
We love China Rats. Such a good band and doing really well at the minute. We’ve seen, and played with, so many good Leeds bands and that’s what makes the scene so strong, it also pushes you to up your game, which is never a bad thing.

Like most musicians, this isn’t your first project and you’ve been through a few bands. What is different about Happy Daggers?
Me and Tom have played together in bands for a good few years so the rhythmic foundations were
already strong before Happy Daggers got together. Sinclair and Danny both have a real knack for melodies and the whole thing just comes together quite naturally. Vibe is so important. We work well together and have a lot of faith in what we’re doing. The banter levels are always through the roof as well. If you’re easily offended it’s probably best you don’t come anywhere near our rehearsal room!

What’s coming up for the summer?
We want to keep getting our music to as many people as possible. We’ve got a number of gigs lined up in Leeds and also further afield over the next few months. We’re also looking to get back in the studio as soon as possible. On the festival front this year we’re confirmed to play Live at Leeds and Solfest in Cumbria, with more on the horizon. This year has started really positively and it really feels like we’ve found our sound, now we just want to get it to new ears.