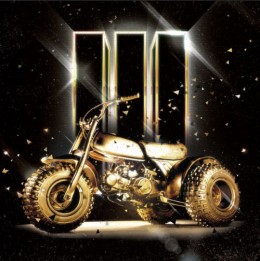 I stumbled upon Family Force 5 when I got lost at Warped Tour in 2007, and it was one of the best mistakes I’ve ever made. Made up of three brothers and two close friends, they “formed” in 1993 but have been releasing beats since 2004. III (pronounced “The Third” or just “Three”) is their fifth studio album, and their first releasing brand new music since 2008’s Dance or Die. And let me tell you, it packs its punch.
They always happily surprise me with their strange combination of rap, rock, and electronic all melded into a big crunk stew. Known for their crazy stage antics (hulk hands designed to hold microphones, a giant hamster ball with the leader singer to be rolled out into the crowd, just to name a few), they somehow also manage to churn out great albums that have an even mix of synth dance tunes and meaningful ballads. With III, the scale tips a little to the former, but it still holds its own in this strange little corner of the genre “alternative.”
III starts with the popular hit “Can You Feel It,” which has gotten them TV play time in the background of commercials and sports recaps. It’s a great start to the album and sets their tone and sound nicely. Some other tracks of note are “Mamacita” and “Tank Top,” which are much slower and very relaxed compared to the usual stereo-breaking guitars Family is used to. “Love Gone Wrong” is a great hit later in the CD and holds a lot of similarities to the songs off their 2006 album “Business Up Front / Party in the Back.” However, the crown of the album goes to the ballad “Not Alone.” Honest and heartfelt, it sticks out in the track listing in the best way possible.
Overall, III is another great record from Family Force 5, with a lot of songs to keep you dancing (or, as they say, “wobbling”) and a few just to make you think. Either way, it’s one to be kept in the stereo for a long time coming.

Mackenzie "Z" Hall has been listening to music ever since someone burnt her a copy of Fall Out Boy's "Take This to Your Grave" back in 2005. Growing up in the hinterlands of central Wisconsin, she now resides in downtown Boston where she splits her time between going to sketchy underground venues in Cambridge and eating avocado paninis. Follow her on twitter (@hallformusic) or shoot her an email at mackenzie.hall.music@gmail.com.

View all articles by Mackenzie Hall