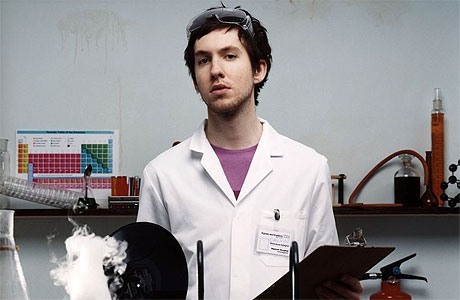 I’m getting more and more surprised by the stupidity shown by the contemporary record industry as each day passes, and Scottish electronica artist Calvin Harris is the latest to feel it’s fowl stench. Seems like Calvin tried to upload a video on YouTube of ”Ready For The Weekend – Original Mix,’ a song he 100% produced – his sole creation, you know, the works! – only to find it removed by the British Phonographic Industry because of copyright infringements. Yeah, apparently he violated his own copyright. Load of bullcrap, if you ask me.

Justified or not, Calvin got really angry the British record peeps and channeled his frustration on his twitter account. “Fantastic use of time combating piracy by removing my own videos, what a f—ing revelation,” he said. “F— the Torrent sites, this is the way forward.”

“IT’S MY FUCKING SONG YOU ABSOLUTE BASTARDS. It’s the fucking BPI. FUCK YOU. What have you ever done for anybody you useless shower of cunts. The BPI are the worst organization to ever walk the earth, and their set-up is shambolic, and their online employees are all massive retards. This is unbelievable, and it seems I am completely powerless to do anything. Sony has done nothing, the BPI has done nothing. I’m going to drive my car into the big window in the BPI’s offices on my way to the studio this morning. I’m going to hire a 4×4 for the day so I make more of an impact, and hopefully reach the online monkeys at the back of the office,” Calvin Harris goes on.

Calvin will release his sophomore album “Ready for the Weekend” on the 17th of August via Columbia/Sony.

If someone downloads or streams an artist’s music illegally (without paying for it), the respective artist loses money, but if the artist can’t promote his work in the first place, he won’t be able to go anywhere anytime soon. I said it before, and I’ll say it again. The record industry is terrified by technology. It absolutely despises it, when at heart it should be embracing it. Some labels or indie artists realized this and managed to become successful, despite piracy. The rest of the industry, however, is still kidding itself with similar acts like these, as it goes through a slow and painful death. Good riddance! [via Spinner]