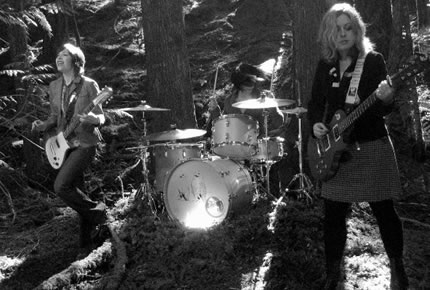 On June 27, 2006, Sleater-Kinney announced they were going on “indefinite hiatus”. On August 12, they played their last show together in Portland, Oregon with Eddie Vedder as support. Almost three years later, I wanted to pay my respects to this great band by analysing their final, great stand – The Woods.

I was lucky enough to be present at what would prove to be Sleater-Kinney’s first and only Irish gig, in the dark, cramped confines of what used to be the Temple Bar Music Centre, in September 2005. Part of an adoring, hopelessly devoted crowd that couldn’t have amounted to much more than a few hundred people, I stood right below Corin Tucker’s monitor, within spitting distance of the lady herself (although she didn’t like it when I kept doing it). It was, needless to say, an amazing performance – I was more in love with Tucker afterwards than I was before, if that was even possible. But then, Sleater-Kinney were an amazing band – perhaps rock’s last great stateswomen, embodying everything angry, joyous, sexual, challenging, playful and empowering about the genre over the course of their all-too-brief 12 year existence.

That was Sleater-Kinney in a nutshell: everything you needed them to be, and more. This was a band that was crowned the queens of the riot grrrl scene, without ever really being part of it; as comfortable deconstructing post-9/11 American politics as sexual politics (often doing both within the same song); less-than-virtuoso playing (save for Janet Weiss’ amazing drumming) made into an unmistakeable, primal sound, informed by conviction and character. And nowhere were their strengths more evident than on their stunningly vicious 2005 swansong, The Woods: an album that, with one shrieking salvo of violent feedback, took everything that made Sleater-Kinney great, and made them into something even better.

The roaring guitars that ensue, as The Fox runs roughshod over your eardrums, tell you everything you need to know about this album: powerful, unrelenting, and louder than they have any right to be. It’s a glorious statement of intent, as confrontational and visceral as anything you’ve ever heard. Then, suddenly, the bottom drops out, and you’re left with Tucker narrating a cautionary fable about a duck and a fox. A couple of bellowed “Land ho!”s later, and it’s all starting to make sense. This album is Sleater-Kinney’s kitchen sink: everything is fair game, even if it means putting Aesop’s Fables to cascading detuned guitars. It’s like avant garde without the pretentious wankery, and with more – ahem – “rawk”.

This sense of adventure shapes much of the album, especially when it comes to the introduction of the freak-out guitar solos. What’s Mine Is Yours carries along on a thumping, back and forth blues kick, telling the tale of an appropriately give-and-take relationship, before burning down into Hendrix-referencing, discordant, backwards guitar solo which darkens the mood of the bridge section that follows – “Sit down honey, let’s kill some time/ rest your head on this heart of mine” turns into “Did you ever get the feeling that you don’t belong/ says the teacher in the classroom, I think there’s something wrong”. The song goes into complete meltdown, all swamp and sludge, before returning to the blues riff to close it out. It’s disorientating, intense and oddly melodic all at once.

Wilderness, meanwhile, takes the throwaway subject of two lovers in a broke-down car “on the way to Chelan”, and poses the question, “Will they hitch a ride, or get into a fight?” It’s the kind of story where everything’s not quite right – the move to “a city where hippies run wild/ everything’s white, now so are their smiles.” It seems to be describing a kind of fake happiness the couple put on for show. But then the quasi-lighthearted lyrics fall away, revealing the entire song as a kind of metaphor for the political divisions in America – “A two headed brat, tied to the other for life… A family feud, the red and the blue/ It’s truth against truth, I’ll see you in hell!”

That kind of juxtaposition of darkness and light, serious and lighthearted, love and hate, is a running theme of The Woods. Modern Girl takes an almost-poppy guitar riff, and a sweet vocal melody, and ties them to lyrics about a decaying relationship and a decaying mental state, as the track is overcome with an intruding static effect. Rollercoaster likens love to food, with lots of cheerful, cheesy (Ha!) sexual innuendo – “Down at the market, pick out a ripe one/ tempting me sorely, and I want to bite one”… “After the first bite, say it’s delicious, but appetite isn’t what we predicted/ would you want to heat it up later?” Then it speeds up, starts comparing relationships to a vomit-inducing rollercoaster ride, and throws the whole song into a loop.

All of which bring on to the three centrepieces of the album: Entertain, Let’s Call It Love, and Night Light. If I was writing this as a review, I’d select these as the “must download” songs, but I’m not, and really, they’re far better listened to as part of the whole. If I was being a good little music snob, I’d tell you try to get The Woods on vinyl to truly enjoy these songs in particular. And I am, so you should – it sounds like a completely different mix on vinyl.

Entertain was the first single from the album, and the first hint that things weren’t quite normal with this album: this was far more gritty and distorted; the ladies’ anger not translating into punky dynamics so much as a spewed vitriolic rant over some not-quite-classic rock stylings. And boy, is it vitriolic – a perfectly pitched punch in the throat to the twin phenomena of reality television and retro-styled bands of 2005 (The Killers, The Strokes, The Hives, et al). The lyrics are cutting, almost spoiling for a fight: “If you wanna be entertained, please look away… We’re not here cos we want to entertain, go away.” And it appears to be true: this is what Sleater-Kinney needed to say, not what they thought would sell to the proles. As Carrie sings late in the song, “We can drown in mediocrity”, you simultaneously feel that just hearing this song, this album – this band – is helping you keep afloat amid the detritus.

Let’s Call It Love seals the deal on the sense of adventure I alluded to earlier: a five minute challenge to a lover, followed by a six minute improvised jam. It’s a deeply lustful song, filled to the brim with thudding guitars and single-entendre lyrics – “My body is all shook up/ like a bottle of pop and I wanna go off/ I’ve got a long time for love!” Tucker’s voice is incendiary on this track, cutting through the guitars like a red-hot scimitar, hitting awe-inspiring heights and breathlessly nailing the come-ons in the verses. The jam is, of course, Carrie’s time to shine, as she truly indulges her inner guitar goddess on record for the first – and regrettably, last – time in Sleater-Kinney’s history. The six minute jam is the release, the catharsis at the end of the tension – sexual, political and social – that’s been building over the course of the album (even their career), and it’s the single point on The Woods that will make you truly long to know what the band could have achieved on their next album.

It effortlessly segues into Night Light, which is as fitting a cap to Sleater-Kinney’s story as I can imagine. Tucker quietly muses over her relationship to her husband and son, her “little spark”, wondering how she keeps going when she’s so torn between them and her music career, facing – through song – everything she finds so wrong in the world. “How do you do it, this bitter and bloody world? Keep it together, and shine for your family.” It’s a slow, almost mournful song, but there’s a certain resolve in the chorus, as if she knows it’s all coming to an end soon. And unfortunately for Sleater-Kinney fans everywhere, it did.

It’s not often a band goes out when they’re at the very peak of their abilities. The greatest bands in the world either become touring bands as their albums cease to be relevant outside their core fanbase – see The Rolling Stones for a perfect example – or hang it up before or after their pinnacle. The Woods was Sleater-Kinney’s pinnacle, and if they had to end their career sometime, it’s hard to imagine there being a better record to close with. As curtain calls go, this one was hard to beat.