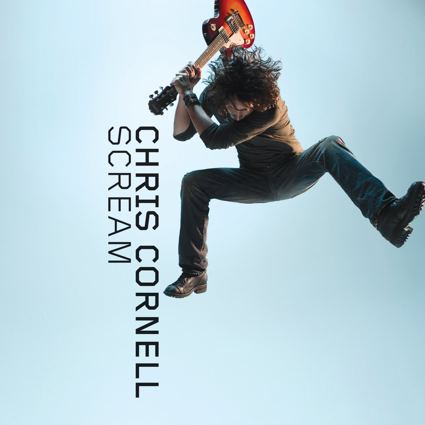 Let’s not beat around the bush here. What we have in Chris Cornell’s Scream is possibly the most misguided, counterintuitive, magnificently awful record Cornell, and producer Timbaland, will ever make. It’s suffers from both hideously outdated production – it sounds like what Cornell, in 1996, might have imagined r’n’b would sound like in 2009 – and a lack of cohesion between artist and material. Cornell’s voice clashes with the sterilised, tame beats backing him up like the oil and water he cites in Long Gone. It’s a hideous, malnourished approximation of the ideal mix of rock and hip-hop Cornell was aiming for, his voice sounding clipped and controlled, rather than set free by the new setting it finds itself in.

The segues between songs, heralded as a groundbreaking, mindblowing component of Scream, sound as out of place as Cornell himself, sometimes introducing completely random riffs, unconnected to either song; other times dragging out the first song, then stopping dead in their tracks to let the next track start clean. Or, most commonly, featuring the whole first verse of the next song as a segue. It’s clear that someone ran out of imagination very quickly during the making of this album, and just tried to get it out and released in whatever state it ended up in. It’s an unmitigated disaster, and should – nay, must – be forgotten about as soon as possible. Worst offenders: Ground Zero, Sweet Revenge, Watch Out, Part Of Me.

God, it was tempting to list the entire record there.

So, with that out of the way, let’s focus on whatever positives we can scrape from the horrendous situation. Well, for one thing, Cornell’s voice is in prime condition. No hesitation on my part: his pipes are worth their weight in gold. Despite squandering his considerable talents here, and in recent solo effort Carry On, hearing him belt out Hunger Strike in concert with the vigour and vocal flexibility he had 20 years ago means there’s always the dim, jaded hope that he can do something worthy of his voice sometime soon. We may never see a Soundgarden reunion – I’m not sure we’d want to – and we might not be treated to anything with the delicate beauty of Seasons or Sunshower again, but I’d like to believe he could at least do better than anything on Carry On if he really put his mind to it.

Erm… I guess the general stink of failure that pervades Scream from start to finish might prevent Cornell and Timbaland from teaming up again anytime soon. That’s got to be a positive for both parties: Timbaland can get back to working with people better suited for his style of music, and Cornell can stop pretending this is somehow natural for him – that it’s the best work he’s ever done, superior to Superunknown, Temple of the Dog, and Euphoria Morning. Which is a self-evidently ridiculous assertion. Maybe once he sees how wrongheaded his dalliance with urban music was, he’ll be inspired to either make a genuinely great record in another genre, or at least drop all these abortions of songs from his concert setlists – since his gigs seem to be the only avenue he’s managing to stay vital and relevant.

I’m really struggling now. Positives… positives… I’m really down on the upsides here. To the point of making bad puns to fill space. I guess everything else released this year will be infused with a healthy glow of “Not Being Scream“. So The Killers and Franz Ferdinand can thank Cornell for making them seem a hundred times more tolerable than they were beforehand. In fact, that counts as a whole extra point in Scream‘s favour – so long as it has the good grace to stay far away from airplay, it’ll make car journeys 700% more enjoyable, because I’ll be hearing music that isn’t this on the radio. Even if it is the Pussycat Dolls: at least they’re not clearly – painfully – capable of something far better.

And I should mention the hidden, bonus track, Two Drink Minimum, which has added production from a certain John Mayer, and takes Cornell back into safe, bluesy territory. But even this is a tired attempt at sounding authentic – it shines like a gold bullion among cow turds on Scream, but would struggle to merit second mention on Euphoria Morning. But really, Two Drink Minimum sounds more like a requirement for managing to sit through the entire album without demolishing whatever music player is responsible for pumping this travesty into your innocent ears – even a good friend, who loves both Cornell’s back catalogue, and a fair amount of modern urban music, demanded I turn Scream off halfway through Sweet Revenge. I think it was the high-pitched vocals in the chorus that tipped the scales.

So, let’s be honest with ourselves here. Audioslave was never in danger of reaching the heights Soundgarden did. Cornell’s previous two solo records told us virtually nothing about the artist – Euphoria Morning, while beautiful, was obviously inspired by lots of alcohol, even more depression and the loss of Jeff Buckley, while Carry On was a slapdash, messy, mediocre attempt at “mature rock”. Scream, however, even at it’s highest points (Never Far Away, for its catchy chorus, Take Me Alive, for its moderately interesting Eastern vibe, and Two Drink Minimum), never even approaches Cornell’s previous work in terms of artistry or listenability. It’s a flabbergasting dumbing-down of a man who seemed too smart, too self-aware, to make such an agonisingly embarrassing mistake.

(If you weren’t a Cornell fan before now, feel free to add an extra point on to the score – you won’t feel the sting of disappointment. If, on the other hand, you loved Cornell, and aren’t supposed to be somewhat objective when giving an album a score, feel free to subtract a point or two.)