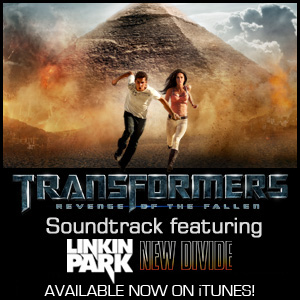 Topping this week’s Box Office, the second installment in the Transformers franchise, “Transformers: Revenge of the Fallen,” is one hell of a blockbuster. Being a big Transformers fan myself since the early cartoon days, I just couldn’t have left the theater not loving it, although I have to admit I kinda prefer the first one.

If you saw it too, chances have it you weren’t just impressed by it’s multitude of stunning visuals, but also by it’s diverse soundtrack, which features Linkin Park‘s new single “New Divide” at its center, along with various other great songs by the likes of Green Day, Taking Back Sunday, The Used, Avenge Sevenfold, and much more. It’s really a rocking soundtrack, and seeing how we’re feeling really generous today, we’ll be giving it away in the following contest, along with a myriad of Linkin Park music and merch.

To enter the chance of winning, all you have to do is subscribe to our blog for free by entering your e-mail in the form right bellow this post and leave a short comment detailing who’s your favorite Transformers character and why. The winner will be picked at random (via random.org) next Friday (10/03/09).

Transformers: Revenge of the Fallen – The Album tracklist:

UPDATE: The contest is over – Cassandra won, after initially EvoOba got randomly pick, but it seems he forgot to subscribe to ZME, so we couldn’t validate his entry. Sorry, mate – be more careful next time. Congratulations Cassandra (I sent you an e-mail, please reply there) and, everyone, stay tuned for our next contest!