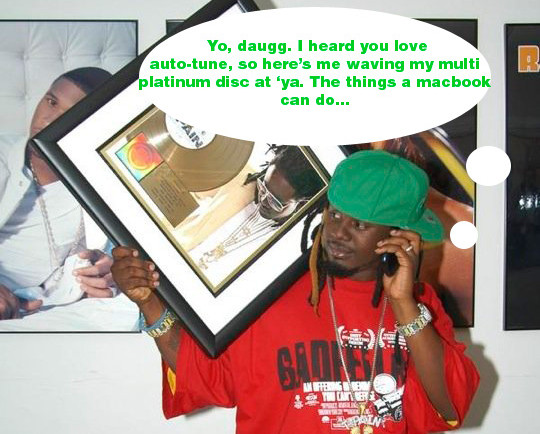 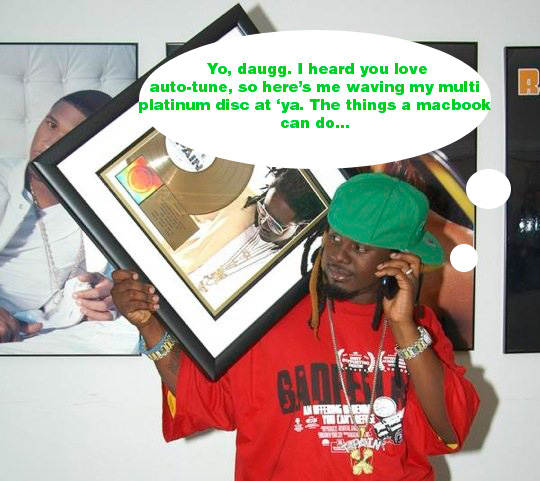 It’s been called one of the defining sounds of this era as well as a trend [that became] a gimmick. TIME Magazine acknowledged it as a rare gimmick  that can lead to innovation. Rick Rubin has called its use lazy and argues that using it can remove the emotion from a performance. All this over a simple computer program? Yes, Auto-tune has both captivated audiences and caused tidal waves of hatred usually reserved for Twilight fans. While Auto-tuned songs have dominated the Billboard charts for months now, I have wondered why this fad – and it is a fad, let’s not kid ourselves here – is so damn popular. Then about a few weeks ago it hit me: familiarity. It really is that simple. Lemme explain.

Any new trend or movement in popular music has always been new. That is to say, said trend or movement has always been different than both what was popular at the time (or, beginning a descent) and what has come before it in music history. The most recent example of a major fad in music, of course, was the teen pop explosion of the late ‘90s and into the first few years of the current decade. Never before had pop music been so planned, processed, and packaged before. Sure, pop music before could be seen as a corporate tool (ahem, New Kids), but at least there was some artistic value in it. But with Britney, Christina, *NSYNC and Backstreet, it was all about the money. Yes, Max Martin is a genius and has a remarkable talent for melody. That was never in question. But it was all fluff. Never before had music been purely about the money – right Mr. Pearlman?

However, with the proliferation of Auto-tune, it’s entirely different. Well, almost. While the use of the program has only been around since the late ‘90s (and the vocal trick upon which it’s based only since the late ‘80s), and aside from its use in Cher’s “Believe” and its appearance in Daft Punk records, the program’s prominence in the last year is pretty much all T-Pain’s fault. Thus, the trend of using Auto-tune is new. But the importance of the program isn’t found in its trend-setting role. No, instead Auto-tune has done what no other instrument, studio or computer program has ever done before: it has literally made songs – and, more specifically, singers – sound alike. Critics of popular music trends have always had that complaint of band ‘X’ sounds like band ‘Y’ which sounds like band ‘Z’ because all of them have jumped onto whatever bandwagon was making money at the time. And while that’s a valid criticism to an extent, the chord progressions and the melodies were different. Yet, T-Pain’s Auto-tuning of vocals has amalgamated every single singer with a current hit into one massive vocal hook. (For the purposes of this column, “auto-tuning” refers to the “Cher effect” and not simply using the program as pitch-correcting unless otherwise stated.)

Which brings me back to familiarity. You see, songs that people love are the ones familiar to them. They are the ones that people know, and know well. The familiar makes people feel like they belong and, more importantly, it feels like home, the most recognizable of all places. Familiar is comfortable because it is known. It’s understandable. It’s always been there and always will. There’s solace in that. The significance of the familiar within the sphere of music is clear: people listen to the music they love the most. To wit, my dad grew up listening to the Temptations and still loves ‘em four decades after the fact. And I’d bet that whatever music you, dear reader, discovered in high school and/or college is the music that has stuck with you, the music that you adore and spin more than anything else. Thus: Auto-tune. If the familiar is what’s comfortable to people and what’s comfortable is what people listen to the most often, then why not use a program that, in effect, makes new songs sound like ones that you’ve heard and love already? It’s so simple. And so ingenious.

And so fucking evil. Here’s why: For us music critics – and, really, music lovers in general – the thing about music that makes it so wonderful, above anything else, is the craft of songwriting. But that’s out the window with T-Pain and his one-trick pony. Provided he’s got access to a laptop, he’s got a hit. That’s all he needs. Sure, the melodies are different across Auto-tuned hits but with respect to their status as hits, it ain’t about the catchy melody. It’s all about that goddamn sound, that one sound that everyone uses. There’s no skill, no technique, no talent. It’s just laziness. A talented singer’s vocal melody is irrelevant if you have Auto-tune. And that’s with a talented singer. What about singers who can’t actually sing? Well, they get rewarded with airplay and digital downloads, too, thanks to Auto-tune because they don’t have to be able to sing. This, of course, raises the question of why anyone would bother using different singers (in name) on songs featuring Auto-tune since they sound the same anyway. Well, that’s part of the scam, part of the convincing that, yes, these songs are actually different when they’re not.

It’s sad that even professional singers admit to using Auto-tune, and not even for that trademark T-Pain sound. No, actual singers like Faith Hill and Tim McGraw (interesting how they’re paired in the media as two different examples…) have admitted to using the program (for pitch-correction) on albums and in concert but to ensure a bankable performance. That’s something that needs to be discussed but it’s somewhat extraneous at this juncture since I’m just discussing the “Cher effect.” Suffice to say that the voice is an instrument just like any other. Thus, mistakes, like being off-key, will occur. But that’s part of the fun of music. Since music is a human entity, it is necessarily imperfect.

It should be no surprise, then, that Auto-tune has become quite the divisive issue among musicians. There are those in support of it like the aforementioned country stars, as well as obvious examples like Will.I.Am, Mary J. Blige, and Kanye, who, according to producer Mike Dean, “fell in love” with the program. Those that are in Auto-tune’s corner are (quite literally) on record. Certainly, having a hit would constitute immediate respect. But those against the program are also ‘on record’ about it. Most notably is Jay-Z who wrote a song about the program’s over-saturation and called it “D.O.A. (Death of Auto-tune).” Moreover, Wyclef Jean also released an anti-Auto-tune song entitled “Mr. Autotune” [sic], featuring the rather catchy chorus, “I’m Mr. Autotune/ If you sing off-key/ For a small fee/ I can make you a celebrity” to which Nick Cannon proclaims, “I wanna make money!” to which Jean comes back with, “Then all you gotta do is pay me/ And I will turn this thing into a karoke party/ You’ll be a superstar.”

Maybe I’m just making too big of an issue of this. It’s just the “cool” (read: profitable) thing to do for now. The trend will die off eventually, so what’s the harm? Honestly, that’s a rather naïve view of this infection, this virus, this Bubonic plague of popular music. Auto-tune could very well be the beginning of a much larger movement toward aural finger-painting, a song-craft Philistinism of the lowest order. In five or ten years, we music critics may be begging for the return of T-Pain. For now, let’s hope I’m wrong.