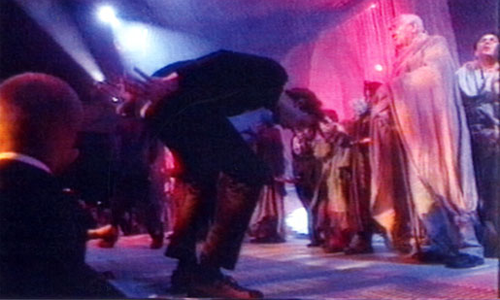 So, apparently, the 16th MTV European Music Awards “went down” on Thursday. Did you notice? I didn’t – I was preoccupied with more relevant, pressing matters, like noticing that ooh, it’s getting quite cold this time of year, and hey, I need a shave. Of course, the fact that these two realisations came in quick succession meant that my addled brain became quite confused, and I ended up shaving my woolly fleece. Live and learn, I guess.

Anyway, at time of writing (3pm on Friday afternoon, thanks for asking), the biggest story to emerge from the EMAs is the complete lack of interesting stories. The biggest controversy was some nonsense about MTV building a “wall” in “Berlin” to cordon off some space for a U2 performance. Oh wow. I’ve had more interesting comas (NOTE: a lie). When – well, I suppose if – we get televised footage of Bono and Jay-Z goose-stepping back and forth across the wall, let me know, then I’ll summon up a grudging interest.

Because that’s the thing about these awards shows now. No one cares unless something awful or embarrassing happens. Bruno shoving his rear end in Eminem’s face? Excellent – everybody’s talking about it. It’s plastered across the internet within seconds, thus ensuring the ratio of “amount of footage of weird anal activity” to “total number of websites” is kept at the required levels. Who cares that it was all pre-arranged? It’s a damn sight more entertaining than watching Rihanna accept her 400,000th award for “Umbrella”. What’s this one? Best Use Of Repetition in a Chorus? Most Irritatingly Omnipresent Song of the Decade? Bah.

Then there was Kanye-gate. Four months of griping, groaning and overusing a new catchphrase, all because of a stagecrash that at least 76% of the enraged masses didn’t see, and most of them believe was a staged publicity stunt anyway. But what does MTV care? It’s all publicity, and at least it kept people talking about the VMAs. Hey, here’s a question: outside of Taylor Swift and Beyonce, do you remember anyone who won an award that night? No, me neither. They were probably crap.

I’m going somewhere with this: music award shows are unendingly, grotesquely crap things. All of them. Awkward and useless, like a third arm that grows out of your anus. They need a moment of pure, unabashed media-baiting controversy to make them even remotely interesting to anyone with anything more sophisticated than mustard swishing around in their thick consumer skulls. Even going back as far as 1996, to the eternally rubbish Brit Awards, where Jarvis Cocker stormed the stage to moon a Christ-imitating Michael Jackson. Headline news stuff. That is what the EMAs were missing. And MTV should get involved to make sure that something interesting happens at every award show. Of course it’s staged, but who cares, as long as it’s funny? Obviously, they couldn’t repeat that particular piece of bare-bum-at-music-award-show history, but they should have gone bigger. Better. Bummier.

Forget mooning anyone. That’s tame by today’s standards. Instead, have some willing indie upstart take a gigantic shit on Jacko’s grave. Or, better, yet, an unwilling one: imagine a tall, thin man in an immaculate black suit and shades holding a gun to Ben Gibbard’s head, as the Death Cab For Cutie singer sniffs back tears while he clenches out a steamer. Meanwhile, Pink gives a rollicking performance of “Don’t Stop Till You Get Enough” in the background. Let’s see if Zooey Deschanel is still his sweetheart after that has been broadcast in agonisingly clear high-def, non-stop, for a month and a half.

And imagine the fantastic new memes that will sweep the world in the aftermath. Forget stupid JPEGs of Kanye West interruping Patrick Swayze’s funeral: people everywhere will be bursting into occupied toilet stalls, proudly bellowing “Yo, man, I’m-a let you finish, but Ben Gibbard had one of the best bowel movements of all time!” And the victim will laugh and laugh and laugh. Or cry and call the police.

Hell, they had Katy Perry hosting the entire awards show. She seems fun and vacuous enough to be up for something bizarre and memorable. Have her dress up as Dame Judi Dench, and mud wrestle a cow. Or have her and Lady GaGa compete to see who can sexually demean themselves the most with a 50 Cent action figure inside five minutes. R Kelly can judge the contest. Just something.

It doesn’t matter how offensive any of it seems – none of it’s real. Celebrities aren’t real people, after all, and it’s certainly not real controversy. It’s all staged! Fake! It’s just MTV’s unrelenting love affair with reality TV shows like Jackass and Dirty Sanchez brought to its logical, sorry, unreal conclusion. It’s entertainment.