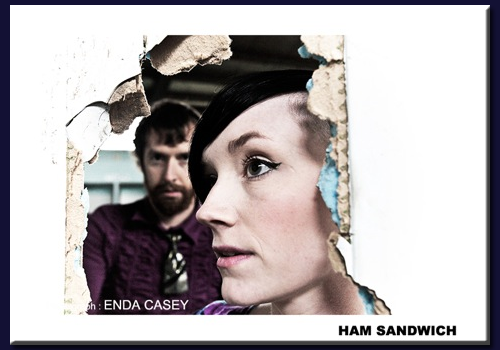 And to think that some people are still deluded enough to believe that U2 are Ireland’s premier live band.

I don’t know if it’s sheer media saturation that’s perpetuated that myth, or just widespread ignorance, but it needs to be stamped out post-haste. Bono can take his impossibly huge stage monstrosities and stick them where the streets have no name; Ham Sandwich have claimed the crown so wrongly placed on Hewson’s overinflated noggin, and painted it neon. Let me make myself perfectly clear: a Ham Sandwich gig is a splendid thing to witness.

Of course, I’ve made that point before. They’re an easy band to wax lyrical about – everything about them is pure fun. From singer/guitarist Podge Macnamee’s insistence on outlandish stagewear (last time out, a canary yellow jacket/hot pants combination. This time? Pink and black striped shirt, matched with tight shiny pants), to their predilection for strewing obsecene amounts of red and white confetti over their audience, to the gigantic balloon that descended on our unsuspecting craniums, to the band’s casual on-stage banter: it’s all about getting both band and crowd grinning like lunatics. (Which is odd, considering that the songs, mostly written by bassist Johnny Moore, are predominantly about relationships gone sour. Anyways.)

Importantly, it’s also about music, and this show was about new music. Ham Sandwich were playing Whelan’s in support of their new single, “Out of the Darkness”, which I talked about the other day (important note: it’s wonderful), and to start the build-up to their new album, due in April. It was a show packed with new material, punctuated with crowd-pleasers from Carry The Meek.

You know the old stuff’s great, right? The assembled throng certainly did. The fuzzed-up bass tones of “Click… Click… BOOM!” heralded the first joyous frenzy of the night early on, and the song built to a genuinely amazing, bludgeoning rock n’ roll climax, awash in clattering guitars and deafening drums. “Words” was another obvious crowd favourite, and it’s not hard to see why: it’s a searingly great pop song, with an enormous chorus that deserves a bigger home than Whelan’s.

And yet, you got the feeling that Whelan’s is actually the perfect size for a Ham Sandwich show: big enough to fit a good-sized crowd, but small enough for Podge to pick out his parents on the balcony, and have the crowd give a collective “Hello” to them. And that was just one instance of the crowd eating directly from Podge’s hand, and indeed, of the band pausing the rawk to remind us how engaging they are beyond the music. For example, singer Niamh Farrell’s charming failure to read her own setlist correctly, or Podge’s demand that she curtail her swearing, which earned him an emphatic, good-natured “Fuck off.”

Most brilliant of all, however, was the quality of the new music on show. “Out of the Darkness” was an obvious winner (again: go listen, and agree), as were “Passing By Your House”, “The Naturist” (“a song about being nekkid, except not really”), “Concrete”, and a beautiful, vulnerable ballad which I’ve only gone and forgotten the name of. I’ll edit it in later, I’m sure. Of course, the quality of the new songs only makes the five month wait for the album all the more torturous, but that’s a bit like complaining that you’ve won the lottery, but have to wait for the cheque to clear before you can spend the money.

Equally lovely was the amount of spotlight given to sometimes-member, Sarah Lynch, whose well-educated violin playing added an extra depth to the band’s (already huge) sound.

The show ended on a predictably spectacular note: a glorious rendition of the alarmingly catchy “Never Talk”. The clear highlight of the Carry The Meek record, it’s an obvious choice of closer, but no less terrific for that – and it was rewarded in style with an impromptu, acapella crowd singalong of the coda after the song finished. The sheer massed enthusiasm of the singalong seemed to almost take the band by surprise, but it was nothing if not well-deserved.

I should mention the opening acts, I suppose. First up, Blind Pilots, whose somewhat generic indie-rock sound showed glimpses of a more unique sound. Their drummer and guitarist seemed especially promising, with the drummer adding capable backing vocals, while the guitarist worked with some interesting textures.

Second support act, The Funeral Suits, though, were regrettable at best; tedious, unrelenting, vomiting bastards at worst. If that seems unnecessarily harsh, I’ll balance it out with some encouragement: should there ever be an X Factor-type thingy aimed exclusively at awful, indie/emo, hooded, skinny-jeaned, squalling wankers, they’re in with more than a fighting chance.

But that’s a real downer, and no Ham Sandwich review should ever end like that. In fact, their set was so incredibly lovely, this review would optimally be displayed in a giant, glowing typeface printed directly onto a rainbow made of kittens and Smarties. Unfortunately, it comes your way in cold, harsh pixels instead, but that just conveys the message all the more starkly: Ham Sandwich embody joy.