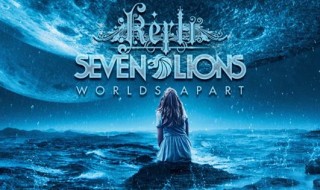 The dub-step/electronic music producer, Seven Lions and the beautiful and very talented Estonian Moon Child, Kerli, joined their forces in order to release the video of their newest single together. Worlds Apart is a fantastic song that combines Kerli’s smooth voice with dubstep sounds.

The video of this song shows a fantasy/sci-fi love story  between a knight and a beautiful girl in a surrealistic world. In the video the singer also appears as a mermaid, singing underwater.

Also, if you want to listen to this song live, Kerli will join Seven Lions on stage for the artist’s last tour concert, in New York. Find more about it here!

The Estonian artist is currently working on a new material, recording in the studio, maybe preparing a new upcoming album. The last album, Utopia, signed Kerli, was released in 2013.
Below you can watch the video! Enjoy!