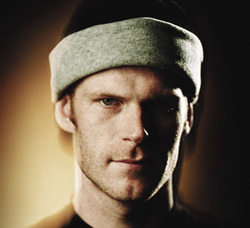 Tom Holkenborg, better known under his stage name moniker Junkie XL, has made quite a name for himself in the electro dance scene, over a decade of activity. He first got some recognition for his skills as a talented producer, remixer and musicians, when his version of Elvis Presley’s “A Little Less Conversation” turned into a smashing hit.

Since then, he’s reworked tracks from Rammstein, Justin Timberlake or Coldplay, but also made his own, unique music. On his fifth studio album, “Booming Back At You” (due March 11), Junkie forgoes the conceptual approaches of previous releases in an effort to capture the energy of his live shows.

“I’m a very upbeat performer,” the Dutch born Junkie tells Spinner. “And I wanted it to keep the fun and the energy going. The biggest difference between it and some of the more rock-based material in my past is that the arrangements of the songs are very basic and very simple. I really felt a fresh energy making this album that I hadn’t felt for years.”