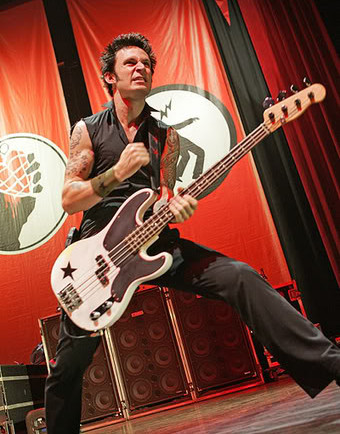 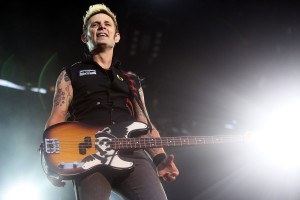 It may be hard to believe, but Green Day’s Mike Dirnt turns forty years old today. In honor of the iconic bassist hitting the big 4-0 I decided to construct a “ladder” connecting Mr. Dirnt to 1920’s blues powerhouse Bessie Smith. I mean hey, why not have some fun to celebrate a milestone in the life of a member of one of the most fun bands on the planet?

Mike Dirnt  Any punk fan, or even any serious music fan for that matter, must have been trapped under a rock for the past twenty years if they don’t know the name Green Day. From a young age, Mike would pretend to play ‘air bass’, saying “dirnt dirnt dirnt” while plucking his imaginary strings, hence his nickname (Mike was actually born Michael Ryan Pritchard). Besides writing the bass lines on all of Green Day’s eight studio albums, he has also contributed lyrics on tracks such as “Emenius Sleepus” from Dookie and the “Nobody Likes You” portion of five part medley “Homecoming” from American Idiot.

Jason Freese Unlike the previous person in this ladder, I will not judge you if you have never heard this name before. Jason Freese is a musician, record producer and recording engineer. With all of these jobs Mr. Freese has worked on upwards of fifty albums with some thirty five artists. Who is included on this list? None other than Green Day! Jason has contributed keyboards, horns, backing vocals, and even saxophone on both 21st Century Breakdown and American Idiot. He has also been a touring member of Green Day, making him appear in live albums Bullet In A Bible and Awesome As Fuck.

Jewel Pop-country sweetheart Jewel has been very active and popular since the mid 1990s, but it is three of her most recent albums that bring her into this ladder. Perfectly Clear, Lullaby,  and Sweet And Wild, released in 2008 2009 and 2010 respectively, all feature Jason Freese playing multiple obscure and somewhat random instruments. When I say random I mean extremely random: mellotron, Hammond and Wurlitzer organs, triangle, accordion and glockenspiel. Her debut album, Pieces of You, which came out in 1995, brings us to our next step on the ladder.

Neil Young The musical chameleon known as Neil Young was drawn to many influential musicians in his mid 1950s childhood, started his career in the 1960s and hasn’t stopped since. So what does he have to do with the younger Jewel? Her debut album was actually recorded on Neil Young’s ranch (he just casually has a recording studio there, everyone has those right?) The Stray Gators, Young’s band who supported him on his 1972 hit album Harvest, played on the album as well.

Bob Dylan Being one of the greatest songwriters of all time, it only makes sense that Bob Dylan’s songs are covered by a multitude of artists. In 1991, Neil Young, along with the Grateful Dead, did just that at Golden Gate Park in San Francisco. Dylan is a fan of Young as well, which he made apparent in a 2008 pilgrimage to Neil Young’s childhood home in Winnipeg. Bob Dylan’s musical prowess is undeniable, beginning with his Minnesota coffee house roots and beyond.

John Hammond In a career that spanned nearly six decades as a record producer and talent scout, John Hammond began the careers of some of the most influential musicians of all time. While known for discovering jazz artists such as Fletcher Henderson and Benny Goodman, he is responsible for signing Bob Dylan to Columbia Records as well as keeping him on the label despite many uncertainties from executives. Without John Hammond, Bob Dylan’s monumental career would not exist as we know it, if at all.

Bessie Smith In the 1920s, the unbelievable voice of Bessie Smith was easily the most widely known of the day. Nicknamed “The Queen of the Blues”, she sang alongside some of the greatest musicians of the era. Once the depression hit, however, Bessie’s career seemed to be in jeopardy. Although she never stopped performing she was in no way on top the way she was just a few years earlier. In 1933, John Hammond asked her to record for Okeh claiming to have found her in semi obscurity, although these claims are disputed. These turned out to be her last recordings before the tragic 1937 car accident that resulted in her death.

So why did I decided to make a ladder like this? Because I can. Happy birthday Mike Dirnt, keep on rocking!