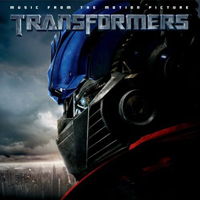 A big chunk of my childhood was influenced by the popular TV series Transformers, i can’t imagine my early years without the colossus fights between the Autobots lead by the nobil Optimus Prime and the evil Decepticons lead by it’s mastermind Megatron.

When i first heard that there was a live action movie based on the animated series i used to watch as a kid, my first thoughs were of skepticisms. I’ve been disappointed before by the adaptations of Marvel comics in the movie world, Spirderman, Punisher, Fantastic Four disillusioned me even more.

Anyway let’s stay on topic, after all this is a music blog, not a movie blog, so the reason why i brought all this Transformer talk is that i’ve learned that it’s soundtrack will be released on July 3, 2007, 2 weeks after it’s theater debute. The O.S.T. of Transformers was composed by the grand master Steve Jablonsky, with it’s main theme being performed by the electro-rock band [tag]Mute Math[/tag]. I ran into the new electrofied Transformers theme down at Mute Math myspace profile page and it rocked. What do you think, is it any good?