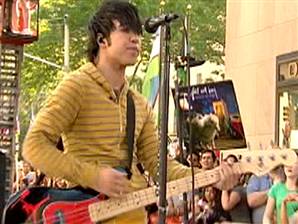 [tag]Fall Out Boy[/tag] gave an outstanding performance yesterday, early in the morning, for The Today Show. In between songs, the band lead guitarist Pete Wentz found the time to answer to a small Q&A interview.

Some questions were very interesting, what stood out to me was the discussion regarding FOB’s next video “Me And You”, which surprisingly will be filmed in Uganda. Pete said they will be traveling to Uganda to film there so that they can directly participate in helping the people there, ravaged by more the 20 years of civil war. Part of the video’s budget will be donated to charity, most likely to a school there says Pete.

Here’s a snippet of the interview ( don’t forget the read the whole post here):

Q: So you guys are going to be doing something on July 12 that you’re really passionate about. Tell us about that.

Wentz: We stumbled upon this organization called Invisible Children and they kind of bring the plight of children to the foreground, like impoverished children around the world but specifically focusing on Uganda where there is like a crazy situation with child soldiers. There’s a civil war that’s like one of the longest running civil wars in Africa right now and you can actually get a great backstory on it if you just watch “The Last King of Scotland” which is a really great film that has like kind of the backstory on Uganda. But we’re actually going over there with Invisible Children and we’re going to shoot our next video for our song “Me and You” over there and we’re going to shoot it on 24p cameras and donate the money that we were going to use in the video for the film or the video to a project over there, I think towards a school I think, I’m not 100% sure but we’re going to go over there and actually right now currently people live in these displacement camps which are like 1 square mile big and its just terrible conditions, like the sanitation and everything is just disgusting and atrocious there and people have lived there for like 20 years and stuff like that so we wanted to kind of see it first hand. Because its so hard to like disengage and actually kind of emphathize with people you know or whatever, you can think about it in your head but its easier to do when you’re actually there and can experience it and it is part of the adventure too so we’re excited to go there.