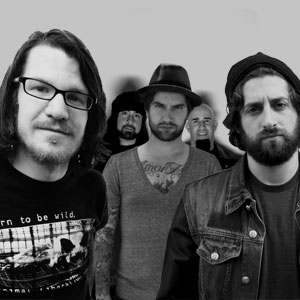 In case you haven’t heard yet, members of Anthrax, Every Time I Die and Fall Out Boy have come together to form The Damned Things. ETID’s Keith Buckley is joined by FOB’s Joe Trohan and Andy Hurley and Anthrax’s Scott Ian and Rob Caggiano.

With this line-up, you can somewhat accurately guess what the band sounds like: a mix of pop-punk and southern-fried metallic hardcore sprinkled with some nu-metal thrash.

First single “We’ve Got A Situation Here” sums up the band rather nicely, moreso than the demo version of “Ironiclast” that has been on the band’s myspace page for a few months now.

I’ve felt that Hurley has been an underrated drummer for some time now, and it’s nice to see his talent on display here instead of trying to mute his skills to fit the admittedly conformist pop songwriting format of FOB. Buckley is, as always, a pleasure to listen to as a vocalist as he sounds like he’s having as much fun with this as he ever has making music. As for the duo from Anthrax, well….I feel confident saying that this is the best thing they’ve been a part of for the last decade.

The band’s debut, Ironiclast, drops December 13 in the UK and the following day in the US.