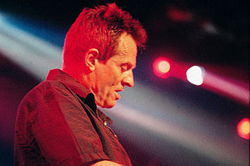 [tag]Led Zeppelin[/tag] bass player, John Paul Jones, has just been asked a series of very interesting questions by Rolling Stone, in what’s the first band member interview, since the massive O2 gig. In the interview Jones tells, famous RS critic David Fricke, that there’s a band meeting this year and confesses that “it could be fun to do more stuff.” Well that’s sure to spark a lot of commotion, meaning either their readying for a upcoming tour or preparing new material, or both. One’s thing certain, something epic’s in the works.

The interview also covered a bit of the prequel and aftermath of the reunion concert, how Jones felt before and after the gig, how they prepared etc. It’s definitely a interesting read worth checking out in this month’s issue of Rolling Stone Magazine. A bonus Q&A pack, regarding the O2 concert can be read here.