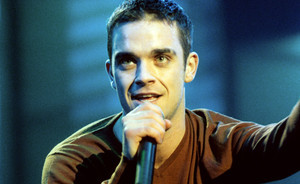 Robbie Williams’ comeback single ‘Candy’ has become the fastest-selling single by a male artist this year after 137,000 copies were snapped up this week, but was banned from BBC Radio 1.

I kinda like Robin Williams. Not really my kind of music, maybe not even my kind of guy, but he’s got talent flowing through his every pore, and he really likes to take it to the edge – and over it. This is the case with his new single ‘Candy’. I can’t really tell you what it’s about, but the lyrics are just so fun it’s hard not to give away a guilty smile. Not quite what you’d want your kids to listen to, but nowhere nearly as explicit and dirty as many other songs which were played, like 50 Cent’s “Candy shop” for example – awful tune by the way.

I guess the Brits really are prude and that’s not just an unfounded prejudice… still, I can understand this decision by BBC.  But what about the music retailer forbidding employees to have long hair or tattoos?

So here’s the song with the lyrics. What do you think about it?