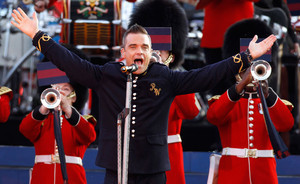 Robbie Williams doesn’t seem to care that his latest hit, ‘Candy’, has been banned from BBC’s Radio One, but he did joke that if they play Coldplay or Madonna, he’s gonna head down to their headquarters and break their legs.

Yesterday (November 5), a spokesperson for Radio 1 explained it’s not a matter of age, that the song is dirty or anything, but rather a matter of relevance for their audience:

“Radio 1 see it not as a question of age, but of relevance. They think there are acts more appropriate to their target audience of 15-29.”

Having listened to ‘Candy’ quite a few times (don’t really like the song, I was just curious about the lyrics), I can only say it’s hella relevant for your typical 15-20 year old audience.

Yesterday, Robbie Williams was switching on the Christmas lights on London’s Oxford street, when he explained he’s not really mad, and he doesn’t want revenge or anything, but he did make this stingy statement:

“It’s not really about having the last laugh. Radio 1 goes through the government. The government’s given them a remit to appeal to 17- to 24-year-olds, obviously I don’t fit in to that and that’s OK,” he said, going on to praise the station for their support through the years. He then joked: “Nothing’s personal, it’s not a vendetta against Robbie Williams, but they better not play Coldplay or Madonna or I’ll break their legs.”