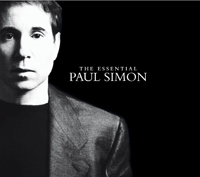 On June 26, “The Essential Paul Simon,” a two disc, 36 song set spanning Simon’s extraordinary four-decade career, has been released by Warner Bros. Records. The release stands as the single best collection of Simon’s greatest songs, beginning with “Mother And Child Reunion” from his groundbreaking debut.

The set includes highlights from each of Simon’s albums, up to the collection’s closer “Wartime Prayers,” from the acclaimed 2006 album ‘Suprise.’

Simon was recently honored as the first recipient of the Library of Congress’ Gershwin Prize for Popular Song at an all-star gala concert held at Washington, DC’s Warner Theatre. “Few songwriters have had a broader influence or contributed more to song genres than Paul Simon.” said Librarian of Congress James Billington, citing “the depth, range and sheer beauty of his music, as well as its ability to bridge peoples and cultures.” The gala concert will be broadcast nationally on PBS June 27, the day after
release of ‘The Essential Paul Simon.’

During his distinguished career Paul Simon has been the recipient of many honors and awards including 12 Grammy Awards, three of which were albums of the year. He is an inductee to The Songwriters Hall of Fame and is in the Rock n’ Roll Hall of Fame both as a member of Simon and Garfunkel and as a solo artist. His song “Mrs. Robinson” from the motion picture “The Graduate” was named in the top ten of The American Film Institute’s 100 Years 100 Songs. He was a recipient of The Kennedy Center Honors in 2003, and his landmark ‘Graceland’ album was recently added to the National Archives.

In addition to the 2-CD set, a Deluxe Edition containing both CDs as well as a bonus DVD will be released concurrently. Together for the first time in one place, the Deluxe Editions’s DVD content features 6 music videos, Saturday Night Live performances and appearances, and an appearance on the Dick Cavett Show. The Saturday Night Live footage includes the classic duet with George Harrison on “Homeward Bound,” a performance of “Loves Me Like a Rock” from the second SNL episode ever, and Paul’s appearance in a comedy sketch with the lounge singing Sweeny Sisters.

1. Mother And Child Reunion
2. Loves Me Like A Rock
3. Me And Julio Down By The School Yard
4. Duncan
5. Kodachrome®
(“Kodachrome®” is a registered trademark for colored film.)
6. 50 Ways To Leave Your Lover
7. Slip Slidin’ Away
8. Gone At Last with Phoebe Snow and The Jessy Dixon Singers
9. Something So Right
10. Late In The Evening
11. Hearts And Bones
12. Take Me To The Mardi Gras
13. That Was Your Mother
14. American Tune
15. Peace Like A River
16. Stranded In A Limousine
17. Train In The Distance
18. The Late Great Johnny Ace
19. Still Crazy After All These Years