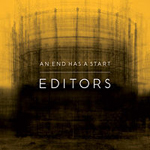 [tag]Editors[/tag] stormed the rock charts in early 2005 with their platinum debut album “The Back Room”. It was such a stunning first album, critic acclaimed world wide, but what of their second installment ‘An End Has A Start’? It’s always hard for any band to out due them selfs, after a good previous work. Do you continue on the track you’ve taken on the first album, on the same style and hope your fans don’t get to weary of you? Or do you reinvent your sound, add a fresh dose of rock to your sound, avoid the previous comparisons to Joy Division, Interpol or Coldplay and hope for the best ?

There’s no doubt Editors have put these questions to good thought. The end result is a Back Room 2, with Editors picking up from where they’ve finished in the first LP. I was disappointed and relived at the same time. As the word goes “if it ain’t broken, then don’t fix it”.

I may be harsh though, “An End Has A Start” has a more darker theme, that make it stand out. Death, it appears, is the central theme, confirmed by the frontman Tom Smith in the title track “An End Has A Start” :“You came on your own, that’s how you’ll leave”. Despite the darker approach, Smith flashes us with here and there doses of optimism, like in “Keep a light on those you love”. “Keep a light on those you love/They will be there when you die”

The LP’s first single is “Smokers Outside The Hospital Doors”. If you don’t take in consideration that it sounds exactly the same like the first album, let’s say “Munich”, it’s a very dynamic track. It starts off with some confident drumming by Ed Lay, which is quickly joined by Smith’s vocals and some piano. Then just seconds later, we hear guitarist Chris Urbanowicz let loose on a beautiful wall of guitar. It is explosive, catching the listener totally off guard. “I can’t shake this feeling I’ve got/My dirty hands, have I been in the wars?/The saddest thing that I’d ever seen/Were smokers outside the hospital door”

“Bones” and “When Anger Shows” continue on the same track “Smokers Outside The Hospital Doors”, good rhythm tracks, that make the LP’s anthems, but sadly sound too familiar.

All the tracks show a passion in Smith’s vocals, but “Racing Rats” stand out more from all the rest of tracks. Smith’s been very restraintful during his previous work, many times giving me the feeling he would just explode with some outstanding vocals, but managing to keeping it for himself. In “Racing Rats” Smith experiments with his vocals and just let’s in rip, but not as much as we can, and he knows it. “Come on now / You knew you were lost / But you carried on anyway / Oh come on now / You knew you had no time / But you let the day drift away.”

In the end “An End Has A Start” is a solid sequel to “The Black Room”, considering all the pressures that a stunning debut brings with it. A lot more was expected by this album and in some points they didn’t deliver, but didn’t failed either. Their success is sure to be repeated, their fan base enlarged and those of you who haven’t been to fond of Editors may be tempted to give “And Has A Start” a shot.

Tracklist:
1. Smokers Outside The Hospital Doors
2. An End Has A Start
3. The Weight of The World
4. Bones
5. When Anger Shows
6. The Racing Rats
7. Push Your Head Towards The Air
8. Escape The Nest
9. Spiders
10. Well Word Hand