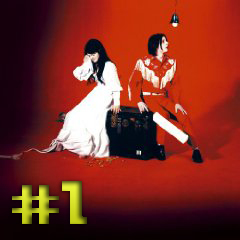 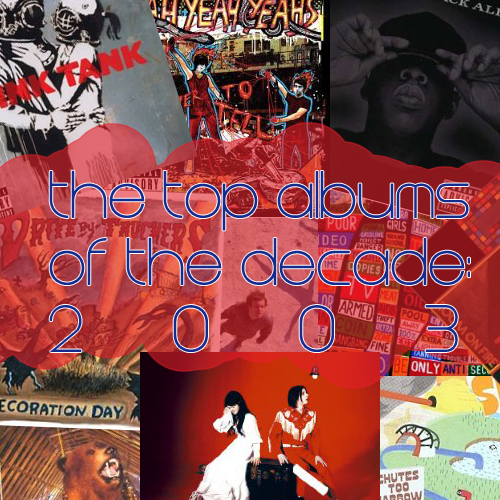 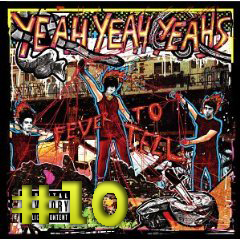 On their first full length record the NYC art-punk trio managed to overcome all the hype built up by their previous astonishing two EPs, and deliver one of the best debuts of the decade. Messy, punk, loud, sexy it all comes together surprisingly well on “Fever to Tell,” revitalizing both spirit and the once blooming music scene. Nick Zimmer exhibits some of the most impressive riffs I’ve heard to date, Brian Chase’s steady drumming keeps the band in a seemingly effortless rhythm and Karen O… well, let’s just say that Karen O is as unconventional and eccentric as she’s ever been. “I was wrong/It never lasts/There is no modern romance,” sings Karen O on one of the few Fever low-tempo songs, the balladesque  “Modern Romance” or “I wish I could buy back the woman you stole” in the bittersweet rocker “Y Control.” Fever’s absolute highlight is without a doubt, tough, the gorgeous, sentimental “Maps” – an aching lament for a lover who won’t come back, which sees Karen O deliver her most expressive vocals to date. Fever goes beyond hype, age and preconceptions. It’s the soundtrack of a woman who wants to get it on and there’s nothing you can do about it but vibe. (Tibi Puiu)

The Strokes – Room on Fire (RCA) 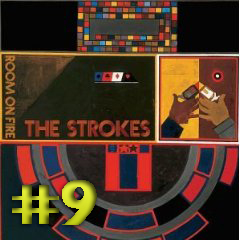 ‘Room On Fire’ the follow up the the hugely hyped Strokes debut ‘Is This It’ sees the band following on from where they left off. The album works on the premise, if it aint broke don’t fix it, and why not?

The album seems as laid back as ever from the band, these guys were almost horizontal in their approach to recording. Casablancas’ gravely vocals seem improved upon since ‘Is This It’ and the band seem tighter with their tracks.

Standout tracks from the album include ‘Reptillia’, ’12:51′ and ‘Under Control’. (Chris Wheatley) 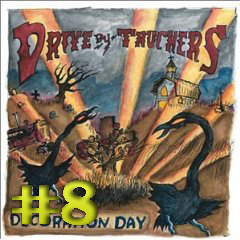 There’s a great line in Warren Zevon’s “Play It All Night Long” – which the DBTs have actually covered – that posits: “There ain’t much to country livin’, sweat, piss, jizz, and blood.” The Truckers took that credo and spun some of the decade’s finest albums from it, Decoration Day perhaps being their best effort (although I say it’s a damned travesty that Southern Rock Opera wasn’t on the 2001 list). Named for an old term for Memorial Day, themes ran dark and murky throughout the album, dealing with blood feuds, incest and suicide. But to the band’s credit, they managed to balance it out with beauty, courtesy of Jason Isbell’s fatherly paean “Outfit” and Patterson Hood’s “Heathens”, and a liberal dose of Mike Cooley’s inimitable sense of humour – “My daddy didn’t pull out, but he never apologised/Rock and roll means well but it can’t help telling young boys lies.” (Al Byrne) 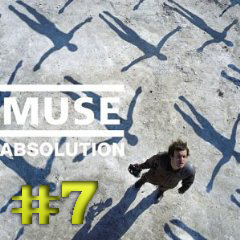 It seems fear is an odd muse (I had to) for musicians. Never has this been truer than Muse’s third album, Absolution, a record wherein Matthew Bellamy clearly doesn’t like what he sees as the potential future. The song titles alone suggest as much: “Time is Running Out,” “Blackout,” and “Apocalypse Please,” and, of course, “Hysteria.” Sure, there are moments of happiness, even joy (“Sing for Absolution,” “Falling Away from You”) but even those instances of delight come at the price of stalker-esque behavior and lament, respectively. Even when Bellamy and company try on optimism, it doesn’t quite fit. Anticipation doesn’t appear to help either: “And I know the moment’s near/ And there’s nothing you can do/ Look through a faithless eye/ Are you afraid to die? Yet, through all of this, Muse wants us to sing along to the approaching end of it all. And we do. Never has paranoia sounded so good. Never has pessimism been so entertaining. (Steve Lampiris) 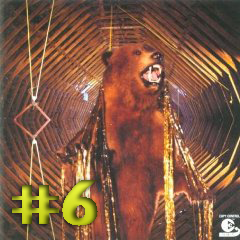 Indie hipsters everywhere became terribly disheartened when news of MMJ moving to a major label (Dave Matthews subsidiary ATO of RCA) for their third record hit the web. A rightful concern, no doubt, but one that was soon to be shattered by the uncanny familiar MMJ sound that was all over “It Still Moves.” The same empty theater atmosphere, the same minimal production, the same, unmistakable Jim James – it’s 100% My Morning Jacket, unaltered. It’s no all the same, though – everything is just… better, on a whole different level! What comes up at first listen as a messy amalgam of American, country folk, indie rock turns into a perfectly synched 12 gem LP. “People always told me,/that bars are dark and lonely” goes Jim James in the stripped-down “Golden”, revealing a new side of Jim James, the song-writer, one more structured and coherent than ever before, only matched on the soon to follow “Z”. The glorious anthem”Run Thru” needs no introduction for any guitar nerd out there. “One Big Holiday”, arguably the song that got most people into MMJ (including myself), conveys just about everything I love about It Still Moves – freshness, eclecticism and hard rockness. Turn up your speakers, folks, ’cause this is meant to be played loud.(Tibi Puiu) 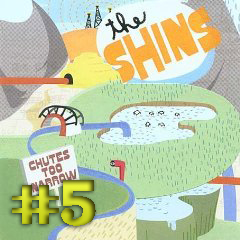 There are two ways to evolve in the realm of indie pop: you either start with keyboards and move to guitars or vice-versa. The Shines chose the former path, which explains why Chutes Too Narrow is the bouncy, guitar-pop spectacle that it is. Chutes improves upon Oh, Inverted World in every way: the production is clearer, the songwriting tighter and the album experience better constructed. Chutes is simply superior – and at the center of this fact is James Mercer having fun. On World he was gloomy for….well, no particular reason. Chutes, however, finds him singing even the most cynical lines with glee. When he argues, “We’ve got rules and maps and guns in our backs but we still can’t just behave ourselves/ Even if to save our own lives, so says I/ We are a brutal kind,” it sounds as if Mercer is delivering a joke. If a brutal kind can deliver an album like this, kill away.  (Steve Lampiris) 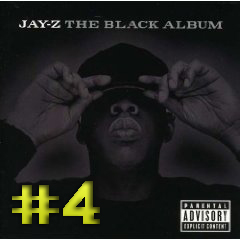 This was his supposed retirement. This was supposed to be the end of Jay-Z and the rebirth of Sean Carter. We all knew it wasn’t gonna last. It was dramatic, but hollow. Yet, none of that mattered. It’s all about how fantastic this record is. To follow up The Blueprint is hard enough (let’s pretend Blueprint 2 didn’t happen, OK?). To do it as effortlessly as Hova did is impressive. It’s a brooding album, to be sure. The record doesn’t sample the Jackson Five or Al Green. Instead, it samples Ice-T and Madonna. Hell, he opens “Threat” with “I done told you niggas nine, ten times: stop fucking with me.” Jay wants to put all this bullshit to rest. And he does. He kills every track set before him, whether it’s Timbaland’s spiraling keyboard line, Eminem’s menacing strings or the Neptunes’ perpetual sexiness. The Black Album may not be Jay-Z’s best collection or even his definitive. But it may very well be his coolest. (Steve Lampiris) 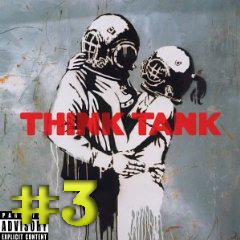 When Blur dropped “Think Tank” in 2003, it seemed like one of the greatest bands of the 90’s (okay, of all time, ever) was fast becoming an afterthought for all four of the lads involved. Damon Albarn was finding massive success with Gorillaz and general musical troubadour-ism, Dave Rowntree was nose-diving into politics, Alex James was farming and making cheese, and Graham Coxon was probably working on his 234th solo album. Coxon actually left the band early on during the recording of this album for various reasons, one of which was his aversion to working with Norman “Fatboy Slim” Cook on a few tracks. So why, given those factors and the logic working against it, was “Think Tank” so goddamn good? Because Blur were (and given their triumphant reunion gigs this year, are) one of the greatest bands of all time, ever. Albarn and his loyal rhythm section had so little to lose, and they pulled back on the chords and went all-in on the beats and grooves. You can hear the band’s recording locale of Morocco come seeping through on songs like “Out of Time,” the druggy singalong “Brothers and Sisters,” and the circle-pit ready “We’ve Got a File on You.” It’s hard to compare “Think Tank” to the band’s landmark 90’s albums like “Parklife,” but you can’t help but listen to the former with the kind of respect that you would from watching a veteran athlete come out of retirement and lead his team to a championship. (Ty Williamson)

Radiohead – Hail to the Thief (Parlophone) 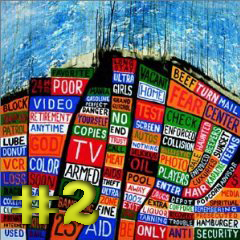 What would a top-ten album list be without Radiohead? In June 2003, their eagerly-awaited release went straight in at no.1 in the UK and hit no. 3 in the US, but, as always, critical reception was initially mixed. Some claimed the band was at the height of its powers, others said they were missing the anthemic crowd-pleasers of the early days. But with that much talent and musical ambition – never mind having been the biggest band in the world for so long – they were always going to leave those lighter-waving choruses behind. “Hail to the Thief” is one of the finest examples of Radiohead taking advantage of their artistic licence, while still creating groundbreaking and genre-defying sounds that appeal to a vast audience. It is achievements like this that have put them among the greatest. (Conor O’Brien)

Some naysayers may point out that their earlier releases lacked some musical accuracy, but never has garage rock been so endearing as the White Stripes. By the time “Elephant” – their fourth album and major label debut – was released, they were one of the most in-demand acts around.  Their biggest hit single, “Seven Nation Army”, couldn’t get off the radio, while the equally catchy “Hardest Button to Button”, couldn’t have been played enough. Critical acclaim was unanimous, and the album earned an impressive Metacritic rating of 92. Debuting at no. 1 in the UK, and reaching no. 6 in the US, this was easily one of the biggest moments for lo-fi rock n’ roll. (Conor O’Brien)