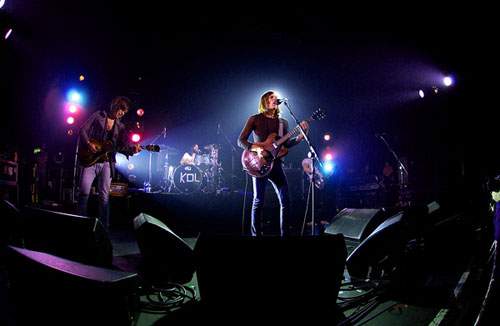 Kings of Leon are really a great band live. They have that particular energy in their live sets, that adds a further dimension to the studio tracks, and make up a total different experience. It’s often said that good, genuine live performances are the mark of a excellent band, and I agree. Problem is, southerners Followill quartet are really pissed off on bootleggers who record their shows. Apparently, the band would really like to play some new stuff off the upcoming album, “Only By The Night,” before it gets officially released, but they’re afraid people will start recording the shows and then upload them over on the internetz. Here’s what Guitarist Matthew Followill told BBC 6music:

“It’s difficult when you make a new record and you wanna play all the new songs live,” he said. “But with technology these days, there’ll be someone out there with a recorder and it kinda spoils it for us.”

“You don’t wanna play too many new songs because otherwise they’ll be on YouTube or something,” he continued. “So we have to pick and choose. If it was up to us we’d play all the new songs because they’re so fun to play.”

You want to hear new KoL stuff? Stop that camera then, but basically you can never stop it. There’s always gonna be some idiot with an iPhone recording the whole thing. Yup, the guys are really living the shows…