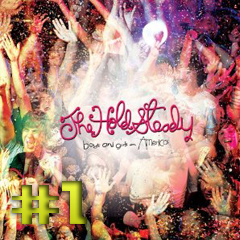 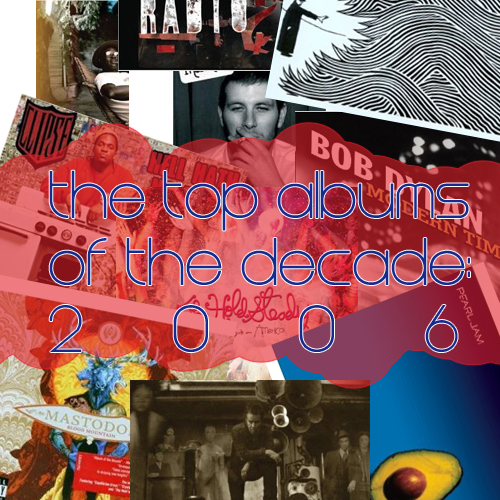 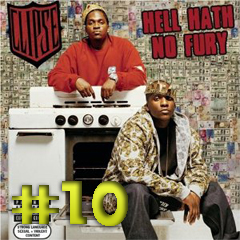 It’s a cold fucking world out there. As drug slingers or as emcees, Pusha T and Malice haven’t had the easiest of lives. That isn’t to say that either “career” is easy, but these guys could write a book just about the two years’ delay of Hell Hath No Fury and it’d be interesting. Or let the Neptunes craft frosty beats over which you rap genius line after genius line. “Chinese New Year” makes Hell worth it alone by being endlessly quotable: “I was in and out of homes like the Orkin man” or “Give up the cash ‘fore I turn you Cookie Monster blue” as the two examples. You could just release the lyrics to this record and that would be serious reading, to say nothing of the best track-for-track work the Neptunes have ever done. I suppose the one downside is that neither the Clipse of the Neptunes will ever top this. It’s not like they have to, anyway. (Steve Lampiris) 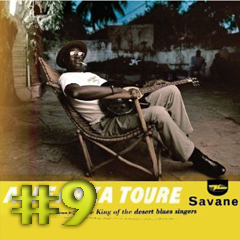 “It’s not so much the music that’s important, as what you’re saying. But the music has to be good for people to listen to the words.” This is a quote by the late Ali Farka Toure that appears on the posthumously released Savane booklet notes, and while through out the album Toure sung in four different local languages, not including French, a message was definitely delivered indifferent of what race, culture or tongue whomever might be listening. Whether he’s painting through notes and strings the stories of his ancestors or his beloved homeland, Toure’s music fuses native tribal Mali desert influences with overseas Mississipi blues, diving the listener deep into a fascinating scenery. Although it’s hard to find one out of place note, let alone track, there are some songs that slightly stand out from the 13 tracklist, like the raggae dub-ish title track, the soulful “Machengoidi” or the delightful “Penda Yora”.  Farka Toure’s death in March 2006 was a great loss to music but with Savane he leaves behind a masterpiece, a legacy which will live on for many years, one which hopefully will be carried on by his son, Vieux Farka Toure. (Tibi Puiu) 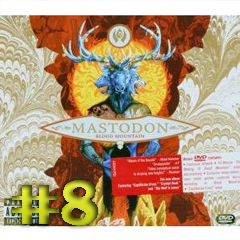 Here was this talented little band from Atlanta opening for Clutch at the dawn of the decade that blew everybody away with technical, melodic progressive metal in a time when the scene was over-polluted and saturated with crappy metalcore. Then came the legendary concept albums “Remission” (the primordial elements), “Leviathan” (the tale of Moby Dick spoken in the tongue of metal) and ultimately what may just be the best metal album of the decade, “Blood Mountain.” Continuing on the same concept album trail, Blood Mountain is a full blown epic metal tale, this time around not so literary though. The story of a man trying to climb the “Blood Mountain” (backed by the viking Norwegian black metal mountain man/dude Joshua Homme), embarking on a quest to reach the top through the “Siberian Divide” and “Capillarian Crest”. In his way and that of his quest stand the “Sleeping Giant”, a “Colony of Birchmen” and “Hunters of the Sky.” There’s no obvious conclusion to the tale, since it comes to a vague end once with the masterful “Pendelous Skin” solo. Blood Mountain is a metaphor to where  Mastodon stand in metal music today, and with this fabulous record they’ve certainly climbed a very high peak.   (Tibi Puiu) 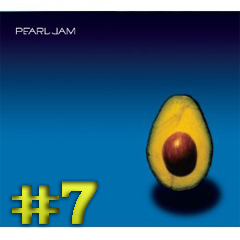 So apparently the angry Pearl Jam is the most worthwhile Pearl Jam. Given Eddie’s penchant for beautiful melodies and heartbreaking lyrics, I suppose it could come as a surprise that when he’s mad he’s most striking. True fans will know, however, that this is obvious: Vs. is the band’s best record, after all. There, they were angry at pretty much everything (guns, cops, the media, the Republican Party). Here, they’re angry at one singularity: the problems facing America. “Worldwide Suicide,” and “Army Reserve” discuss (read: rage against) the Iraq War, and “Marker in the Sand” discusses war from the religion vs. religion point of view including its ridiculousness; “Unemployable” and “Gone” lament the economy, the latter being from an existential perspective; and “Life Wasted” finds Eddie almost screaming about the titular topic. Sure, the album has its ‘pretty moments’ found in “Parachutes” and “Come Back,” but overall this is PJ pissed off at the world – again. Admit it: there had better be a Republican in office when PJ puts out another album. (Steve Lampiris)

TV on the Radio – Return to Cookie Mountain (4AD, Interscope) 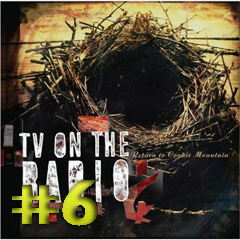 Indie rock was taken to a whole different level when Tv on the Radio released their fantastic debut album Desperate Youth Blood Thirsty Babes, however when this gem of a record dropped … well, let’s just say it caught everybody completely off guard. Of course, there were very expectations for  TVotR’s sophomore effort, but what they did is not only managed to follow-up a classic with something even better – they managed to transcend everything art-rock used to mean up to 2006. Lyrically or musically, Return to Cookie Mountain is equally impressive, like most of their past work, but now the spacing for which the band’s songs have become so notorious are now backed by more intricate arrangements and hooks, making the album feel extremely layered, yet comfortably spaced. You won’t find any filler tracks here, but on such haunting melodies like “I Was a Lover”, “Province” (feat. David Bowie) or “Wolf Like Me” the band’s genius truly surfaces.  (Tibi Puiu) 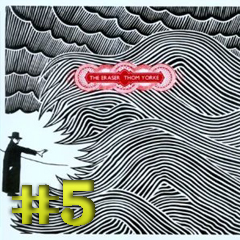 All bleeping aside, this was a very plucky project from the Radiohead frontman and one that also highlighted his true creative force within the band (and maybe how much he needs to be drawn away from that abstract sample library). Although The Eraser didn’t reach anywhere near the commercial success of a Radiohead release, for the many reasons why the Oxford five-piece consistently make top-10 album lists, Yorke’s solo offering is not out of place here. The ingenuity and haunting sound of tracks such as ‘The Clock’ (which he can perform to great effect on an open-tuned acoustic guitar) and Harrowdown Hill – based on the mysterious death of UN weapons inspector Dr. David Kelly – are enough to make it a contender. (Conor O’Brien) 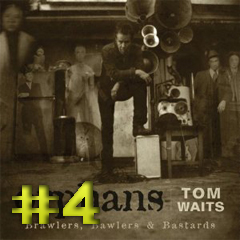 If you asked Tom Waits what this 3-disc tome was meant to be (an album? A performance art piece? An odds-n-sods collection?), he would probably regale you with an 8-minute long story about how theories conflict on how snakes got banished from Ireland, and how he and his wife Kathleen invented a new kind of bicycle built completely out of Pringles cans. You couldn’t come up with a more appropriate summary for this collection if you tried. It successfully blends a psychotic mix of old, new, and ‘WHAAA?’ Waitsian goodness, which may or may not two myopic Ramones covers, a Bukowski essay in musical form, a heartfelt tribute to Snow White and the Seven Dwarfs, a formidable chunk of the Threepenny Opera, and of course, a few legit pop singles that fell through the cracks over the past four decades. It collects most of Tom’s soundtrack contributions from films like Shrek 2 (“Little Drop of Poison”- my favorite moment of that movie), too. It divides everything up somewhat evenly through three disks – harder, more driving material (“Brawlers”), gentler, boozier ballads (“Bawlers”), and all of the off the wall stuff that he can get away with because, well, he’s Tom Waits (“Bastards”). (Ty Williamson)

Arctic Monkeys – Whatever People Say I Am, That’s What I’m Not (Domino Records) 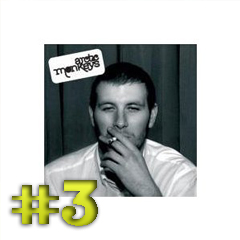 They might be one of the biggest, sought after bands in the UK right now, but back in 2006 these Sheffield teens were still playing small pubs and turning heads ears on every airplay they got, which was practically all day long. Of course, they broke every chart record when Arctic Monkeys’ now legendary debut album, Whatever People Say I Am, That’s What I’m Not, came out. Upon the band’s surface onto the scene, critics were fast to coin them as the new Beatles or just as well tagging their debut as the Definite Maybe of our generation. Neither the band, nor record stood up to the above affirmations, but the band never intended to cause this kind of hype in the first place – it’s just a rock album. Ok, bullshit. It’s not just a rock album, it’s a bloody brilliant one! Whether its the perfect guitar rock anthem “I Bet You Look Good on the Dancefloor” or the infectious, moody “When The Sun Goes Down” this record is almost perfect from start to finish.  (Tibi Puiu) 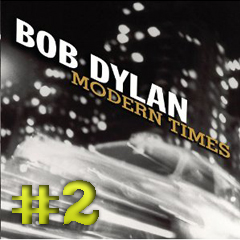 Were into a whole new millennium and we still have Bob Dylan topping album charts. But who’s arguing? He may have now spanned six decades as a commercial artist, thouhg his love for music – and sheer genius for it too – has not waned. Produced by Jack Frost (which is actually the man himself) and with lyrics based on the works of US Civil War poet, Henry Timrod, Modern Times won a Grammy for Best Contemporary Folk/Americana Album and also Best Solo Rock Vocal Performance for ‘Someday Baby’. This album may have won Dylan a new audience (it couldn’t get much bigger, surely?), but it his third consecutive studio album to be highly praised by his long-term fans. By the end of 2007 Modern Times had sold 6.3 million copies worldwide. (Conor O’Brien)

Our well-deserved #1 album does seem to be regarded as the prototypical Hold Steady album, doesn’t it? And not just because it pilfers its title from Jack Kerouac’s On The Road novel, although I’m sure that does sum up the band’s raison d’etre pretty neatly. In actuality, it’s probably thought of as such because it was their debut on a major label, but that’s not to cast aspersions on the quality of the record itself. After all, no album that opens with songs as joyous and – if I can be so crude – bloody rocking as “Stuck Between Stations” and “Chips Ahoy”, and only gathers momentum from there, need me to defend it. It’s as much a nostalgic tribute to good time rock n’ roll as it is a suburban rock opera, and it’s utterly, utterly brilliant. Plus, it’s got Dave Pirner from Soul Asylum doing vocals on “Chillout Tent”! (Al Byrne)