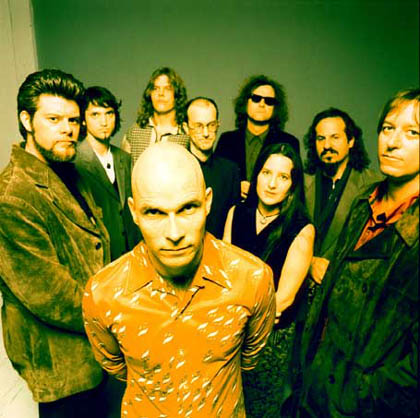 Pearl Jam’s Mike McCready is all about supergroups nowadays – after last year we were telling you about a supergroup planned with former Guns’n’Roses bandmember Duff McKagan, now, he joined instrumental group Tuatara, consisting of R.E.M. and Screaming Trees members among others. Together, they have unveiled the band’s upcoming double album: “Underworld”. No bonus points for title originality.

The group was formed back in 1996 by R.E.M. guitarist Peter Buck, drummer Barrett Martin of the Screaming Trees, Justin Harwood of Luna on bass and Skerik of Critters Buggin on saxophone. “Underworld” will be their eight album, and will see the light of day on August 15.

Even if you’re not into instrumental music, to me, Tuatara is the perfect kind of music to leave in the background, when you’re working or enjoying your meal. The sheer quality of the musicians involved and the melange of creative ideas can be seen through all their albums. While on the first album, Breaking the Ethers they tried their hand at reinterpreting ethnic music, in recent years they’ve somewhat moved to different areas of world music. They haven’t released anything since 2008, so who knows what we might be in for – especially with McCready onboard.

“Their new double album is titled ‘Underworld,’ and it has a song in a new short film from underwater filmmaker Drew Alston. Drew is a contributor to Google Ocean, and he uses the Tuatara song ‘She Dreams of Snow’ for his short film about ocean conservancy. His film, ‘Save Your Planet Everyday,’ will debut on June 8 at the Reef Renaissance Film Festival on St. Thomas in the Virgin Islands, but you can preview it here first!” the announcement concludes, along with the clip below.

I really, really loved the song, and the short film. Enjoy it here: