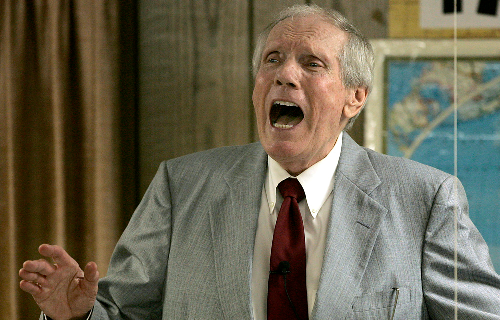 Hello, you handsome several. I know you’re just as rib-pressingly eager to get on with this week’s dissection of the bulbous, limp frog we so deludedly label “The News”, but I want you to wait for a moment – I have yet to introduce our guest commentator. And this week’s guest commentator is this lunatic: cheerful espouser of vengeful religious wrath, Westboro Baptist Fred Phelps!

And now: THE NEWS.

“That’s whatcher git for bein’ a filthy devil-worshipper, with yer heavy metal music and yer monster masks. What’s the big ideer with ’em masks anyways? Good God-fearin’ folk can be scary without resortin’ to masks – good honest folk like myself are the scary face of God!

“That’s whatcher git for bein’ a buncha fags singin’ in a faggy song contest. Has no one heard the Westboro Baptist Church’s music? We don’t have to resort to nonsensical, filth-filled song contests or put up with snide commentary from that fag Norton to embarrass ourselves musically!””

“That’s whatcher git for bein’ a buncha crazy, delinquent idjits who couldn’t even — waitasec! Nooooo! I’ll get you for this, He-Man! You haven’t seen the last of Skeletor!”