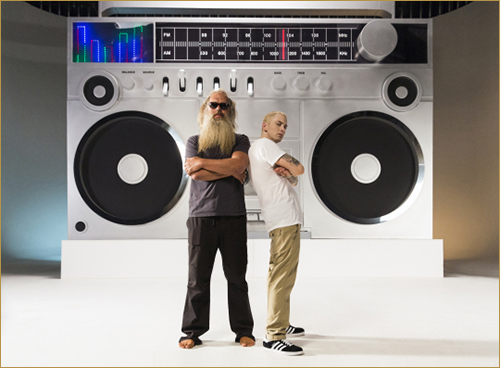 Eminem has unveiled the full-length video for his new song, “Berzerk” – a video which pays tribute to the Beastie Boys’ “So What Cha Want” video, with the distorted, photo negative background and Eminem’s delivery and dress. The video features notable appearances, including Kendrick Lamar, Rick Rubin, Kid Rock and Slaughterhouse.

Still, as much as I was excited to see new work from Eminem, especially something going back to ‘vintage Slim’, he didn’t really seem all that thrilled.

Well, I don’t really sure what to make of that – I guess we’ll have to wait until November 4, when the new album comes out. Meanwhile, enjoy the tune.