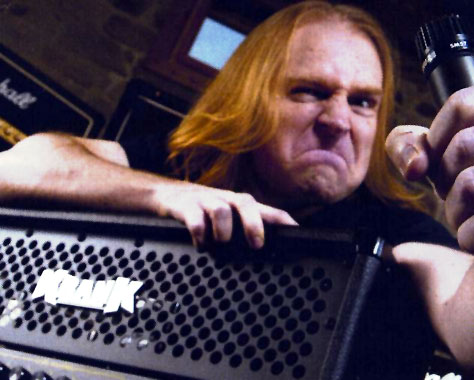 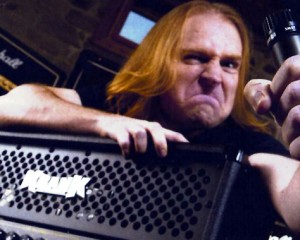 I remember the first time that I heard Megadeth’s “Head Crusher” last July. Within the first twenty seconds, I knew two things were true: Dave wrote the song and Andy Sneap mixed it. The former item is rather inconsequential, as I saw on youtube that it was indeed a Megadeth song. (Had it not been labeled, it still woulda been quite obvious…) But the second is not. In this, the beginning of 2010, the work of the absurdly fecund producer and audio engineer can be spotted without much effort. This, of course, presents a rather bizarre conundrum.

OK, here’s the thing: Andy Sneap is a fantastic producer and an even better audio engineer and mixer. Hell, he’s probably made half of the 10 best sounding metal albums of the last decade. This, of course, is also the issue: When you’re as acclaimed and as prolific  – due to being so highly sought after – as Sneap is in the metal world, quite literally every third album, if not every other, that’s on any level of notability sounds exactly the same – right down to the fucking snare drum! So, while his output is perfectly balanced (aside from the bass, more on that later), it blends together into one enormous, yet immaculately constructed, sonic blob.

Let’s go back to Megadeth’s “Head Crusher” and compare it to Arch Enemy’s “Nemesis” from July 2005. The snare drum is unequivocally the same sound used in both songs that are four years apart. Never mind that both songs – indeed, both albums – share the same uncanny thick and oddly clicky guitar tone and metallic sheen-covered, yet lifeless-sounding, bass. What’s even more notable is that the two bands cited here aren’t from the same country, or even from same continent. Just to be clear, Sneap mixed Opeth’s Deliverance which doesn’t resemble the rest of his work, though this may have something to do with it being Opeth and the fact that it wasn’t for a big metal label.

Which brings me to the other significant point about Mr. Sneap: when his signature mix does appear, it’s usually when he’s producing/mixing an album for a “major” label (that is, a major label by metal standards). Megadeth’s Endgame sounds like Arch Enemy’s Doomsday which sounds like Killswitch Engage’s The End of Heartache which sounds like Exodus’ Shovel Headed Kill Machine because the albums were released by Roadrunner, Century Media, Roadrunner, and Nuclear Blast respectively. Now, a key here is that three of these albums were put out by American bands. That’s important because, apart from Arch Enemy, his trademark sound doesn’t appear in bands outside of the U.S. Certainly, his work on Soulfly’s Conquer isn’t readily obvious. Nor is it immediately evident that he mixed Cradle of Filth’s Thornography. Sure, the snare drum sound is there, but the guitars and bass are definitely European. And yet both of these records are also put out by major labels, Conquer and Thornography both being Roadrunner releases.

Essentially, my complaint comes down to the same argument I made about Auto-tune last summer. It would appear, on the surface at least, that major record companies – Century Media, Roadrunner, Nuclear Blast et al – use Sneap’s style of mixing and production in order to garner the most attention from prospective fans. Their logic is deceptively simple: if you like the way one album sounds and you buy it, why not another? Forget the fact that two different bands might play two different styles of music – say, for example Arch Enemy’s Scandinavian melodeath compared to Killswitch’s American metalcore. As a by-the-numbers fan of metal, you’d be drawn to both records because they sound alike with respect to the mixing process. You may like metalcore and not melodeath or vice-versa, but you’d be attracted to both anyway if only on a quasi-unconscious level because Sneap’s mix was utilized for both albums. Of course, you could argue that the average music fan doesn’t pay this much attention to music and, therefore, wouldn’t notice that both albums are aural twins. Certainly, this is a valid point. But maybe that’s the principle at work here: because the average music buyer doesn’t pay close attention to production and just “likes the riffs” (or whatever baseless reason to select music), the average music buyer wouldn’t noticed that s/he had been enticed by something right in front of them. It’s a tad Machiavellian, yes, but so is “American Idol.”

Or perhaps Sneap is his own man, producing and mixing because he loves to do it and he enjoys making metal albums sound as clear, crisp and flawless as possible. Perhaps he’s not a pawn of the music industry and instead the majors just really, really want his Midas touch. If this is true, it might actually be worse than if he were a puppet because, in this case, the good he’s trying to spread in the metal world is tainted by his very actions towards goodness.

Which brings me back to the problem that audiophiles like me are faced with: do we want more and more albums that are technical perfections but sound exactly the same or do we want albums that are technically impure but are sonically unique? Personally, I’d like to see the latter if only because the genre under discussion is metal. Metal as a genre has never been one to try for pop sounds and to attempt to mold it in such a way, while admirable, runs antithetical to what metal is at its core. When I reviewed some of the Black Sabbath reissues a while back, I contended that the cleaner production of the reissues as compared to the original recordings is “a bad thing” because

[m]etal is intended to be dirty and filthy so a clear sound can be understood as, ironically enough, cheapening the product – or, rather, its potential enjoyment.

And while I sided with the reissues purely on that level – that they sounded clearer and, therefore, enhanced the enjoyment with respect to music in general – I had to admit concurrently that “metal is truly meant to be sludgy.” Basically, ‘true’ metal is meant to sound like this instead of this. So, I guess Sneap’s overabundance in metal isn’t the worst thing to ever plague extreme music, or even music as a whole. (The worst thing ever to plague any genre of music is, at least in the last 10-15 years, is screamo-crunk.) That said, the predilection of modern extreme music does seem to be a problem. Think of it the way that Nietzsche thought of Christianity: if every single person is considered great under its umbrella, then those that actually are special – because they’re talented or highly intelligent or whatever the case may be – are absorbed into the whole of the religion as simply Christians. Their gifts are set aside because Christianity is the ‘great’ equalizer. The same can be said of Andy Sneap’s practical cornering of the market: his work makes albums sound perfect and should therefore stand out from the rest that don’t. But since his work blankets the entire field, the resulting effect serves to veto what made his work special in in the first place.

If Sneap wants to be remembered as a bountiful producer and mixer in the realm of metal, then he’s damn close to reaching his goal. If his goal is to be remembered as a producer and mixer that had an unparalleled ability to weave a (near) perfect sonic tapestry in the realm of metal and create a sonic niche all his own, however, well then he’s in a predicament. While he has created his own signature touch in mixing, his work isn’t special if its heard on so many albums. His distinctive style is diluted by his own hand and, thus, his touch becomes the industry standard: The niche becomes mass appeal, and Andy becomes Ryan Seacrest.

We don’t want that.