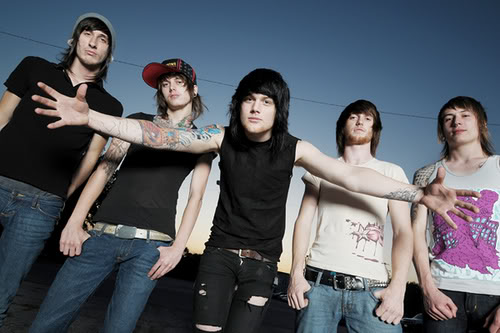 Following the success of their latest effort “From Death to Destiny,” UK metalcore act Asking Alexandria are taking their ambitions not to the next level, but to the next level after the next level. During a chat with Metal Hammer, frontman Danny Worsnop took the big words straight out of his purse:

“I’ll say it right now: we want to be the biggest band in the world,” he said. “I want us to one day be big enough to headline festivals. I can’t understand why any band wouldn’t want that,” the singer added.

Seriously, who the f*@k is Asking Alexandria? I can right now think of at least three metalcore bands that kick their arses (musically speaking) any day of the week – let alone artists from other genres. Thankfully, guitarist Ben Bruce still has a touch of diplomacy, chipping in to mend things:

“I don’t think it’s big-headed to say we’re ready to take the next step,” he explained. “‘From Death to Destiny’ is the best album we’ve done and we’ve achieved all that we have on albums I’m proud of, but we always knew we were capable of more. This time it feels like we can aim for higher things. I love this album, all of it, but I still think we’ve got better things in front of us.”

That – is a reasonable statement. That I can get behind – you’re happy with how you did things and you’re ready to take it to the next level, good for you and all the best. But showing of a smug attitude, throwing claims left and right about how awesome you are, and how even more awesome you’re gonna be – nope, that doesn’t work. Not unless you’re Roger Waters.

I wanted to end this post with a song from Asking Alexandria, but screw it; they’re gonna be the best, you’ll hear their songs then.