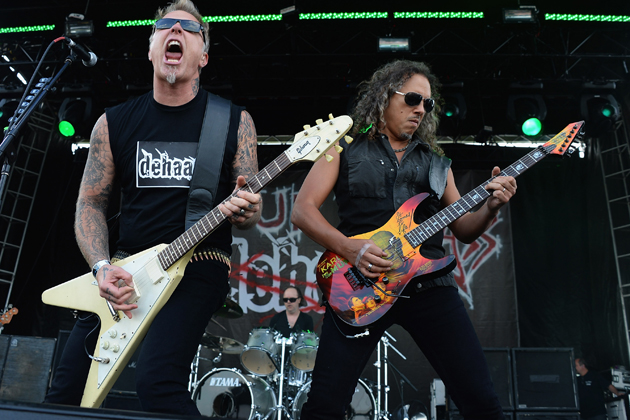 The first day of this year’s Orion festival kicked up quite in style – event hosts Metallica took everyone by surprise by taking the stage under fake name Dehaan and charging through their entire debut album “Kill ‘Em All.”

Around 4:30 p.m, when you usually just wake up from yesterday’s party, frontman James Hetfield first introduced “the total mystery band no one knows anything about.” They then came and tore it up! I mean old school Metallica days, when they actually played thrash.

In case the name Deehan baffles you, then you probably haven’t heard of the band’s latest cinematic project – a 3D movie entitled “Through the Never“; the movie is starred by Dane Deehan.

In a recent interview, Metallica’s guitarist Kirk Hammett talked about the entire festival, describing it as an attempt to educate both fans, and themselves.

“The hope is that sure, Orion will attract all these heavy metal fans and all the Red Hot Chili Peppers fans, but we’re hoping that someone that likes Bassnector or Foals or Japandroids might be into the heavy metal bands,” the axeman said. “And we’re hoping that heavy metal fans might be into Foals and go, ‘Oh my gosh. I had no idea these would people sound like they do. I’m surprised!’ And all of a sudden, there’s a new Foals fan because of the Orion Festival.”

He wanted the festival to be more diverse, following the European model.