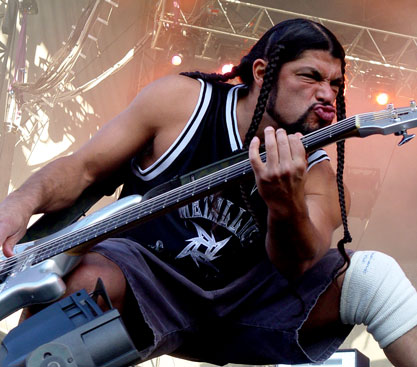 Well, we’ve talked a lot about Metallica… one could argue that we’ve talked a little too much about them, but call me a hopeless romantic – I’m still hoping for a good Metallica album. Odds are, not going to happen.

Taking the time to discuss the new album (after admitting that the last one sucked), Trujillo couldn’t hide his excitement over what he described as “an extension” of the group’s previous release “Death Magnetic.”

“The real scoop would be that, in the last few months, we’ve been jamming new ideas. Now, I guess, you could say it’s a blessing and a curse. There is an arsenal, years of riffs that we have recorded,” the bassist started. “James Hetfield, I mean, the minute he plugs in his guitar and adjusts the tone knob, he comes up with the world’s greatest riff. It’s a process of elimination to see what is gonna be good enough for what we’re trying to do and it takes a long time.

Even though the album which came out in 2008 topped the charts, becoming the fifth consecutive album to get to no. 1, old time fan (myself included) were very disappointed by it. But as I already told you – hopeless romantics can always hope.