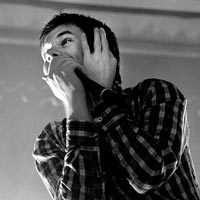 Bellow you can read a very insightful Q&A with Rou Reynolds, the lead vocalist/keyboard player of the post-punk/hardcore band Enter Shikari, a band that’s only at is second album, but tah has already began to gather a cult-like following in the UK.

Info about the new Enter Shikari album, titled “Common Dreads” (out now in the UK, 2010 in the US), as well as bits from Rou’s personal and professional life can be found bellow.

Your first album Take To The Skies–released on your own Ambush Reality label–debuted at #4 on the U.K. chart, becoming one of the most successful self-released rock albums ever. With your choice of major label offers in the U.K., why did you decide to release it on your own and what did you learn from it?

At the time, we didn’t really feel like we had a choice–we’d been touring for around two years properly without any press or label interest. We’d done everything along the way ourselves from the booking to the designing and printing of T-shirts to recording our demos. It was only as we released “Sorry You’re Not A Winner” that the interest suddenly boomed and by that time we realized we could do it ourselves with the help of the family we had built up around us. I’m glad it happened just as it did as I’d hate to be tied up in a major label deal now in this current era of uncertainty.

Your new album COMMON DREADS will be officially released in the U.S. in the Spring of 2010. For the U.S. release, you are partnering with DGC/Interscope. What made you decide to join forces with a major at this point?

We were lucky enough to get involved with a good crowd over there as there’s no way we could repeat the same rise in the U.S. as we did in the U.K. It’s obviously colossal in size compared to the U.K., so we knew we’d always need some help along the way and have to play a different game. Saying that, we have done a fair few tours now by ourselves– just playing the toilet circuit and it’s been really fun and still feels organic.

On COMMON DREADS, you teamed with producer Andy Gray (U2, Tori Amos, Korn, Gary Numan) and holed yourselves up in the isolated Isle of Wight. How did this work for you? What did you feel the result was for COMMON DREADS?

It was superb– it couldn’t have been more of an opposite experience from the recording of our first album. That was rushed down in two weeks and I’ve never been happy with the way the vocals sound. This time around, it was a conscious decision to get away for a few months and experiment. Andy (Gray) was wicked as well–he was up for anything from burning pianos (“Havoc B”) to breaking into churches and recording organs (“Fanfare”) to singing outdoors in boxers whilst it was snowing at 1:00AM to get that real ‘cold’ vibe (‘’All Eyes On The Saint’’). It was a real fun experience and I’m really proud of the result! COMMON DREADS really captures the live feel of the band and our vision.

Fusing such polar genres of music such as electronic and hardcore, how would you describe your music to someone who has never heard of you?

What would you describe as the most powerful song to you on this album? Which new song do you really enjoy performing right now?

That’s a tough one–I’d probably have to go with “Fanfare.” It was all done pretty last minute, so I guess it came out as a final outpouring of frustration with both our countries’ aggressive foreign policies this past decade. I’m loving performing “Havoc B” at the moment–Chris pulls down some vicious sub bass to get the ground shaking and at the end hearing the crowd join in with the chanting creates such an unbelievable sense of unity.

What was it like growing up in St. Albans, England and how did it shape you as a musician?

St. Albans has always had a struggling, but thriving music scene. First getting into the local hardcore, punk and ska scenes was great, but as we got older we noticed the local Council really started coming down hard on gigs and local venues. We fought for years putting on shows at our local youth club, and they’d actually go to crazy lengths to try and pull our live shows. Ironically, it created a sense of community for our scene and everyone got involved to do what they could to keep it alive. It still happens to this day; the last time we did a homecoming the Council tried to pull it–luckily the local press were on our side and exposed them for how stupid and malicious they were being. Other than the music, St. Albans has a great Roman history and the most pubs per square mile in the U.K.!

You’ve performed at some of the most impressive festivals in the world including Coachella Valley Music & Arts Festival, Download Festival, Reading, Leeds, Summersonic and all of the major European festivals. What’s the difference between your festival performance and your club show?

Nothing really–we don’t really approach them any different. It’s just a longer run to get to the crowd at a festival which is always a bummer, but we get there.

What was the inspiration behind the song “Juggernauts?”

We campaigned to stop a local superstore giant here in the U.K. from building a store right in the center of our town. It was just a nice quaint victory that was really inspiring to see everyone getting involved. The song itself is about how important it is to feel involved and to have a sense of belonging to your community and how our current economic and social system actively discourages this.

Describe your worst night on tour, ever.

On our last U.S. tour our van broke down as we were leaving Philadelphia. We spent 12 hours in a Walmart car park with a mechanic trying to fix it from 1:00AM whilst right in the middle of a thunder storm. It was pretty horrendous. We had no sleep and had to miss our show the next day so we were totally gutted.

What do you think is the biggest misconception about ENTER SHIKARI in the United States?

Rob isn’t allowed in the States because he posted a box full of his own shit to Walmart’s Headquarters and there was consequently a bomb scare and the whole building was evacuated (joking).

Why is English food “as some people say” so bad?

Who needs good food when you have good beer and cider? J

How would you define English food? It’s just a culmination of other cultures food really… oh no we have Trifle! Come on! Trifle rules.

The name ENTER SHIKARI came from a boat that belonged to your uncle. Why did you choose it and what do you feel it means?

Shikari means “The Hunter” in many Indian languages. My uncle was a fisherman and back when I was a kid I used to go out onto the high seas with him and just thought it was an awesome word. When we made the band, it just kind of fitted into what we had to do. We knew to make changes in this world you have to get out there and hunt yourself. It just seemed apt for how we were working as a band (the whole DIY style) as well as our political outlook.

What is your biggest guilty pleasure?

Have you been to Stonehenge and what do you think of Spinal Tap?

Stonehenge is awesome. Still fills me with absolute wonder and awe every time I go there. Spinal Tap is just the industry standard, total classic.

If you could record a song with an artist outside the genre of music for which you are known, who might that be?

I’d love to work with a rapper called Lowkey from London. He does really political hip-hop, which is such a breath of fresh air from the normal commercial bulk of hip hop which just glorifies violence and condones negativity and greed.

If you could have a conversation with anyone, living or dead, who would it be?

What has surprised you most in your career so far?

How nice the majority of people you meet around the world are.

Any hobbies outside of music? Sports, etc?

I like swimming and dirt jumping (bikes), but other than that I’m not really into sports. I don’t like the sense of rigid and ruthless competition promoted in most sports. It always puzzled me in high school the amount of anger sports produced in people. I think it’s kind of pointless and silly.