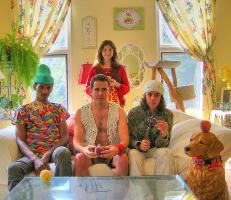 Washingtion DC noise rock Apes quartet are preparing to release their forth full length album in the form of “Ghost Games,” scheduled to be released February 19, 2008. One of the tracks off the band’s upcoming effort is the synth infused “Beat of the Double.” It’s certainly feels a little different from their previous material, most likely because of new lead singer Breck Bunson refreshing vocals. [tag]Liars[/tag] influences can be felt through out the song. The percussion work on Beat of the Double is particularly exceptional and impressive, add that to the rest of the band’s experimental vibe that it  employs and  you’ve got yourself a wicked song on your hands.