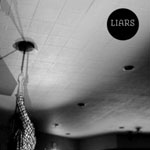 [tag]Liars[/tag] is one of those bands that you simply don’t know what to expect from, they’re totally unpredictable and always experimenting with their music. This has caused some severe loss of fan base over the past years, because of their ever changing albums, each LP with a totally different and weird theme (witches, betrayal, the adventures of a Mr. Heart Attack etc), but this however has caused Liars to have one of the strongest and most loyal fans a young band could possibly wish. Now at their forth album, the self titled release “Liars”, they are ready to set new standards in experimental and post-punk, with yet another artistic sharp turn.

Last years excellent ‘Drum’s Not Dead’ , for which the band relocated to Berlin to experiment with German industrial/progressive rock and metal, now seems just a prep-album for the self-titled. This is clearly a more accessible listen, then Liars previous material, shocking by embracing a slight pop approach to their songs, slightly abandoning the menace and secrecy that shrouded their records. The end result is a beautiful noise-pop album, of which the likes have never been seen or heard.

The album debuts with its first single Plaster Casts of Everything, a chocking conglomeration of noise and heavy riffage, toped by howling keyboards and finally ignited by frontman Angus Andrew shallow vocals “I wanna run away! / I wanna bring you too!”. Changing direction is “Houseclouds”, a indie-pop song that resonates with slow funk and squelchy piano notes, sounding more like its a [tag]Beck[/tag] or [tag]Muse[/tag] outtake. “Sailing to Byzatium” is great example of how great soft rhythm and piano distortions work, creating a vibrant environment, that almost sets you afloat, much like [tag]Radiohead[/tag].

Noise and obscuration is continued by “Leather Prowler”, a dark, almost apocalyptic song, that would’ve been better placed on their sophomore album, in total contrast with “Freak Out”, certainly the most cheering song of the album, of anything they’ve put out actually, with cheeky riffs and repetitive lyrics. “Liars” comes to a epic halt together with the closing tack “Protection”, a wishful ballad about childhood that melds frosty Kraftwerk synths and beats to Mercury Rev-like wistfulness.

Releasing a self-titled at their forth album is very unconventional, as the branding is commonly used at an bands first album or not at all, this means either a re-inventing of the band’s identity and sound or just a signal light that this where their real work begins. Whatever that may be Liars have succeeded in releasing an awesome album, that is sure to last a while in your ipod.