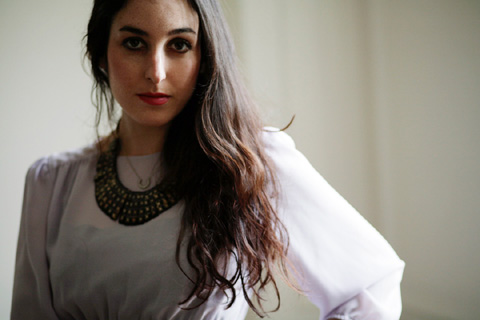 Dream folk musician and artist Marissa Nadler brought her slow and melancholic music to the Daytrotter Session, where she performed four exceptional songs, using just a acoustic guitar and her weary and beautiful voice. The tracks played include 3 songs from her Songs III: Bird on the Water LP, as well as an unreleased song. Here’s a description of the songs from Marissa herself:

These four songs are from a combination of origins. “Sylvia” and “Diamond Heart” are both from Songs III: Bird on the Water, which was produced by Greg Weeks of the Philadelphia band the Espers. “Honey Bear” is a new song that I was able to record in the Kemado Records New York studios when told I would get to include four new songs with the US release of the record. I was really excited to get to include fresh songs. The time it takes from the writing process to when a record is actually heard can be quite long, so Honey Bear and “Salutations in the Dark” are more present representations of my songwriting.

You can download “Sylvia”, “Diamond Heart” , “Salutations in the Dark” and “Honey Bear” from here