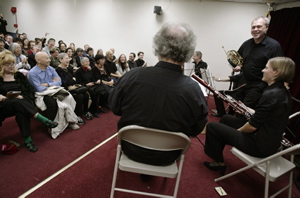 The Berlin Philharmonic flew into town and one of the first stops by some of its musicians was the gritty streets of the Bowery rather than upscale 57th Street. They sang for about an hour and they included Mozart and American blues at the Salvation Army in Chinatown.

The space was not that big and spectators were a bit squeezed into the pews of a tiny chapel but they listened to the world-class musicians who sang free of charge, in sweltering heat under a worn red velvet curtain. “We’re here to tear down the walls of ‘high art’ – to broaden the reach of the people,” Berlin horn player Fergus McWilliam said later. “We are not high priests of music.”.

What they are doing is very good because the majority of people does not listen to and understand that kind of music, because they have not had any contact with it or because they believe it is just for fancy people. The program was just one of the tableaux from “Berlin in Lights,” a 17-day festival that has brought artists from the German metropolis to New York City.

“Our plan for the 21st century is to come out of the ivory tower and go to the community, instead of waiting for people to come to us,” said the Scottish-born McWilliam. “We are an elite institution with the resources to make a difference.”Very good initiative. “With great music-making at its centre, the festival examines a fascinating city reborn with the reunification of Germany – one that has reinvented itself in our lifetime and largely reshaped its identity through culture,” said Clive Gillinson, Carnegie’s executive and artistic director.