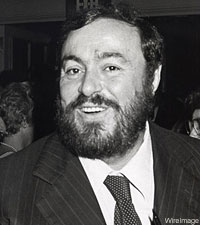 This is truly a sad day for the opera world and music lovers alike, as the “king of the opera” Luciano Pavarotti just recently past away, in his home located in Modena, Italy, due to pancreatic cancer complications. Regarded by many as the most important tenor of our times, the 71-year old singer achieved global fame and success during the mid ’60s and ’70s , becoming a global ambassador for the opera and Italy. He was also one of the original three tenors, alongside Placido Domingo and Jose Carreras, with whom he toured around the world several times, for a audience of millions. His last full scale concert was in Taipei, December 2005.

He was also regarded by many with skepticism because of his so called “commercial” collaboration with pop stars along the years. Here’s a few videos with Luciano Pavarotti singing along with a few great famous pop and rock stars, like James Brown, Jon Bon Jovi and U2 .

James Brown & Luciano Pavarotti – This Is A Man’s World