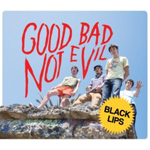 The term of garage rock revival seems to get tossed around a bit easily, few bands really follow up to their label so to speak, but a band of witty post-teenagers that jams in dark basements to Stooges songs, such as early [tag]Black Lips[/tag], might deserve their tag line. Although far from their early garage days, self named “flower punk rockers” Black Lips still convey those influences in their music, namely in their past four albums. Now at record number five the Atlanta quartet have decided to make a more accessible album, targeted at a broader audience, not just their native southern brethren, filled with vintage southern vibes and filth rock songs.

Earlier this year, in February, the band released their first live album Los Valientes del Mundo Nuevo, a great LP containing their best work until then on live sets, and if you’ve ever seen Black Lips play on gigs you would know how wild and eccentric they are, as their reputation exceeds them. Nudity, fireworks, band members kissing, urinating, vomiting and dancing chickens on stage are just a few of the things you’re likely to see. Luckily, or not, Good Bad doesn’t include any video footage so you can safely spin the CD.

“Katrina” is the perfect opener, explosive and dazzling, setting the tone for the entire record, while “Veni Vidi Vici”s tropical hula like drum loop makes the track a stand out. My personal favorite is “Navajo”, the tale of white man falling in love to a indian girl, what makes it so great is the rusty guitar chops and hilarious chorus, in which Alex Cole recites a shit load of indian tribes. On the same humorous tone “How Do You Tell a Child That Someone Had Died” (one of the longest song titles I’ve seen) is a satirical guide on how to break death news to a child, but unfortunately no matter how you tell him he will still cry.

“Bad Kids” and “Cold Hands” are clearly the catchiest songs of Bad Evil, with frantic choruses and trademark southern dusty riffs. “Transcendental Lights” is a song with a more mystical approach, starting off in a classic Black Lips manner, before transcending in a ’70s horror flick soundtrack, with thrilling riffs and drum beats, toped by a creepy piano line and vocals. It’s definitely a more adventurous album, with some missteps here and there, but over all a great addition to the ever expanding Black Lips discography, that is sure to deliver to hardcore fans and aspiring fans alike.