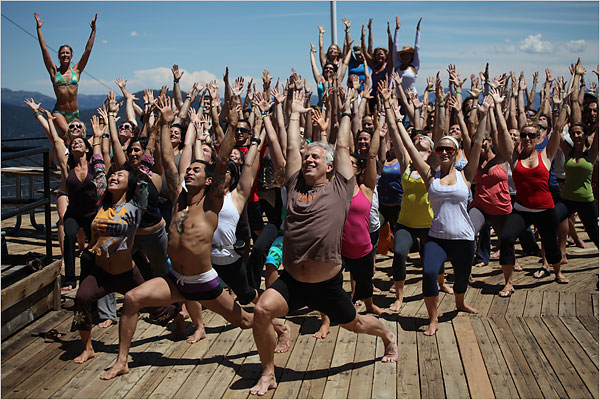 Yeah, sounds like a combination out of a bad cappuccino commercial, but for this past weekend at least, indie rock and yoga went hand in hand as the Wanderlust festival unraveled itself over a three days period of non stop energy channeling and heavy rockin’ in the chilly Lake Taho, CA.

We want people to leave feeling better than they did when they came, transformed in some positive way,” said Jeff Krasno, a music executive who created the festival with his wife, Schuyler Grant, a yoga teacher. She said their vision was “to incorporate the exuberance and the joy and the fun of a music festival, and the deeper experience of a yoga retreat,” adding: “To go to a three-day fairly hedonistic experience where you’re going to be drinking, probably, and smoking a joint, maybe, and dancing all night, and then do yoga and walk away feeling good, how cool would that be?”

Swap the Yogo with two rounds of mojitos and you’ve got yourself a deal. Still the experience tempeted over 4000 people who attended the festival this weekend, paying between $25 to $165 for tickets to the music or the yoga.