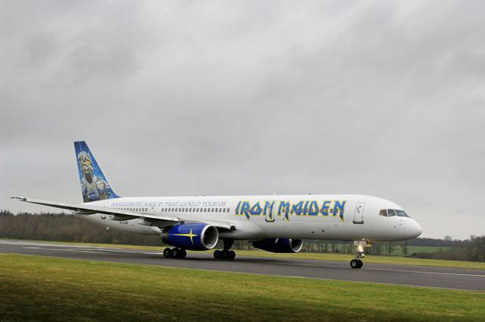 There’s no safer and better way to travel then by air, but the heavy metal icons of [tag]Iron Maiden[/tag] go a step further, by commissioning their own custom plane. The plane has been primarily purchased as the band intends to do some serious traveling for their upcoming 2008 tour around the world. Piloting, the converted Astraeus Boeing 757 decorated with the Iron Maiden logo and the band’s skeletal mascot Eddie, will be none other then the band’s frontman Bruce Dickinson, who is also a licensed pilot as well as a talented musician.

“We had the idea last year of converting a jumbo jet into effectively what would be a flying 113 ton ‘splitter bus’ for touring and we have been working seriously on it ever since,” Dickinson–who is a qualified Airline Captain for Astraeus Airlines–said in a prepared statement. “It’s pretty complex but in the end we were able, with a lot of help from Astraeus Airlines, to overcome all the technicalities of customising the plane for our purposes. We are taking out the back 10 rows of seats to fit in a customised cargo hold that we can use again in the future if this jaunt works. This is in addition to all the standard storage holds.

“By taking band, personnel and equipment in one form of transport, it makes all the touring so much easier and overcomes the logistical difficulty of people and equipment going in different planes. We can even work out exactly how big our carbon footprint is and take care of that responsibility! We will be packing as much of the show into the plane as we possibly can for this first leg and intend to give the fans something very special to remember. And it allows me to combine 2 of my greatest passions, music and flying.

The band is set to travel over 50.000 miles, across 5 continents with a 60-members strong crew and support staff, and over 12 tons of equipment. More photos of the plane here: