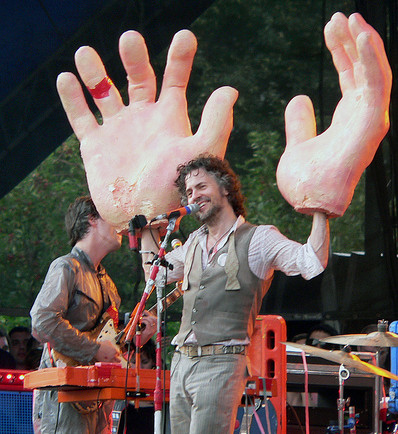 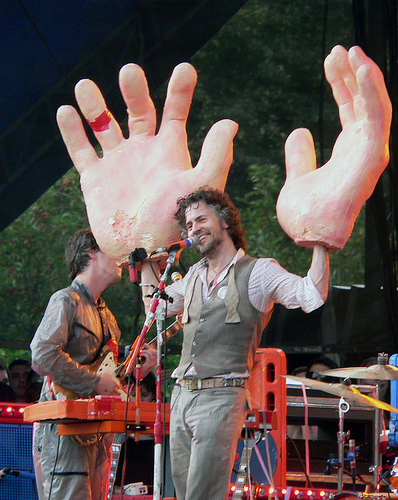 Last night, The Flaming Lips played LA’s Ricardo Montalbán Theater as part of a more intimate set, free of the band’s usual live show props (no explosions, fake blood or anything that could be considered outrageous, not for The Flaming Lips at least). There, the band opened up the crowd with a set packed with new songs off the new album, “Embryonic” – a really hate it or love it release.

Besides the impeccable performance, last night was made a lot more interesting right from the beginning, as the band revealed some very interesting insights on what they have in stored for 2010 as part of the pre-show Q&A. The biggest news was that the Lips have in mind to record a track by track interpretation of Pink Floyd‘s monumental “Dark Side of the Moon” – a very exciting project, if you ask me, which is certain to challange everyone from band members to fans, considering The Flaming Lips are notorious for their experimentalism.

The Dark Side cover project will be made in collaboration with Stardeath and White Dwarfs (which includes Wayne Coyne’s nephew Dennis Coyne as a member), and will feature guest spots from Henry Rollins and Peaches. In all likelihood, the album will be probably available as a iTunes exclusive, according to the band.

In other Flaming Lips related news, Embryonic marks the band’s last album under their current Warner Bros. contract, but according to The Flaming Lips frontman, most probably they’ll prelongue their stay with the label for quite a while.

“We don’t really want money that we haven’t earned,” Coyne said. “We’re lucky that we’re able to earn lots of money. A lot of bands and artists aren’t as lucky as we are. But we would never at this point to just be businessmen and say, ‘We want this much money or else.’ We want to earn it. Bands and entertainers make stupid money as it is.”