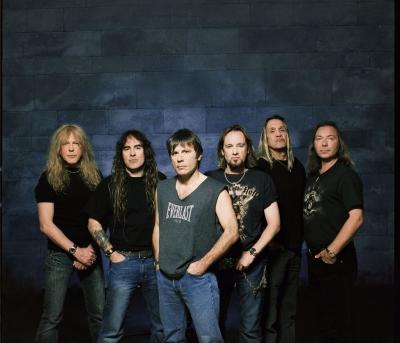 I already bought my ticket for the Iron Maiden tour! Hope you have yours, cause there’s pretty much sold out; except for ebay perhaps, but that’s always taking a chance. Anyway, what could be better than going to an extraordinary event such as an Iron Maiden gig? Going to an Iron Maiden gig and seeing Anthrax too!

That’s right, the metal legends have announced a short spring tour, kicking off with a warmup club show at Chicago’s Double Door on May 28th, 2008. The Chicago warm-up show will be the band’s first live performance with their new singer Dan Nelson. After that, they’ll hook up with Bruce Dickinson and the rest of the guys.

“Playing with Iron Maiden again is such a thrill for us! We can’t wait to be a part of these two magical nights.” Guitarist Scott Ian adds, “It is an absolute honor to be asked to open the Irvine shows for the Kings of Metal Iron Maiden. Anthrax’s tours with Iron Maiden are my all time favorites. Up The Irons!!!” Lastly, bassist Frank Bello exclaims, “I saw them 2 weeks ago and sang every word. They’re better than ever!! I can’t wait to play with them again!! Good times!!”

They’re currently writing some material for their eagerly awaited album “We’ve Come For You All,” which will be their first album with Dan Nelson on vocals and the first studio effort since 2003. Busy busy times for them.w