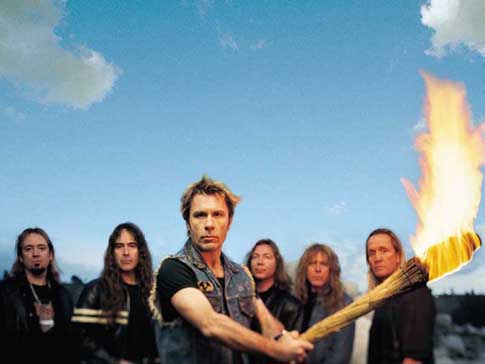 Wednesday night was a good day to rock, as Iron Maiden rolled out hit after hit in front of a 12,500 strong  crowd in Concord, CA. “I think there are a few new faces out there,” was how Bruce Dickinson opened up one of the band’s songs. “Some younger people who weren’t even born when we wrote some of these songs 25 years ago,” he follows.  When I first heard this the first thing that came to mind was how true his words were; after all I’m just 20, but even I know what the band’s represents for metal and what they’ve managed to achieve over the years. I can only bow my head and wait for their next concert in August.

Anyway back to the concert. Although they may seem wrinkled and rusty Iron Maiden still has it in them, as the band performed a two hour long gig, spiting hit, after hit, including extended versions of ‘Wasted Years,’ ‘Run to the Hills,’ ‘Number of the Beast’ and ‘Powerslave.’ Sadly or not, for the Maiden nostalgics, Bruce announced that many of their hits will go in retirement for a while, explaining that next time they’ll be back (in Concord, CA), they’ll play some new songs from the upcoming album. That’s right folks a new album is in the works. They’re last album to date, the 2006 A Matter of Life And Death, was a huge success from all points of view.