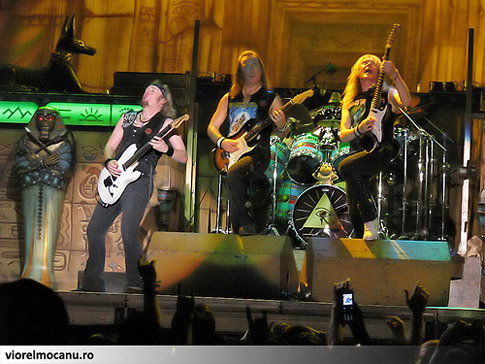 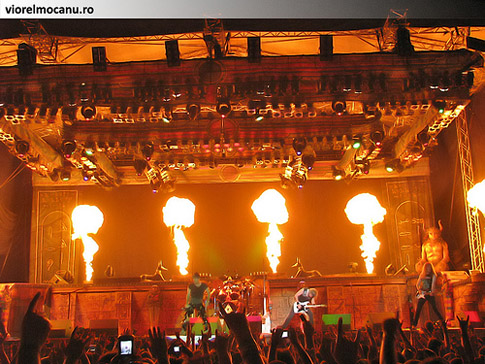 Monday, August 4th. A day that will forever remain in my heart, and that of over 22,000 people gathered in the Cotroceni Stadium of Bucharest to hear icons Iron Maiden play. What a show, what a band, what a night…

Let’s start from the beginning, though. I embarked with Andrei on a 2 hour train ride towards Bucharest, right in the morning, with the tickets in our pockets, votka and cola on the right and a great deal of rock in the air. Anyway, we met up with some friends, grabbed a few beers at a local pub, and then headed on a 20 minutes walk towards the stadium, where the concert was set to erupt.

At around 18.30 we entered the stadium, all in proper order, with no complications, although I’ve heard there was a delay of over 1,5 hours at the entrance, as the first pitch fence wasn’t in place yet. All was well for us, so who cares, right? We went in, had a few more beers and patently waited for the concert to kickstart. 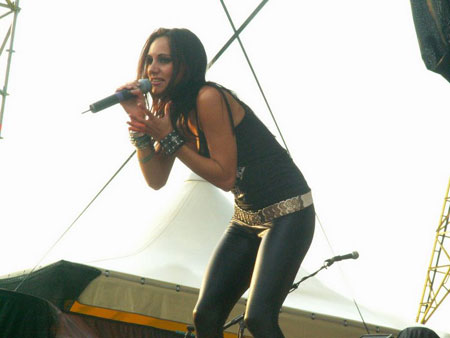 Lauren Harris. Baby, we love you!

At around 19.00 the first opening act, Lauren Harris and her band, took over the stage and began their set. For those unfamiliar with the name, Lauren is actually Steve Harris’ daughter, Iron Maiden’s founding member, bassist and main songwriter. The band was….OK. And I’m being highly indulgent. The band employs a glam rock style, with a ’80s like ‘fuck you’ attitude, which when mixed together didn’t really blended well. The songwriting and Lauren’s voice was somewhat of a mess too. She was smoking hot, though, and she also tried to communicate with the audience. I mean she actually knew where she was, unlike other people…. (for those unaware, Lenny Kravitz came last week to Bucharest to perform. In the mist of the show he addressed the crowd: “We need all of Hungary for a love revolution!”  Excellent, Lenny. Say no to drugs, kids!).

Next, came a local band, that’s very loved here in Romania by the metal audience, with over 13 years of experience. Plus, they got their name from Iron Maiden song, so you can imagine how Trooper was the perfect fit for the ‘iron glove.’ 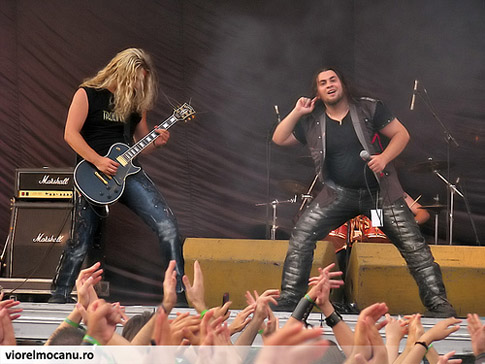 Trooper and part of the crowd gone wild.

“We’ve been waiting for this for 13 years” said Coiotu’, the Trooper singer and frontman. “It’s always been our dream to open for Iron Maiden, and now it’s finally happened” he went on, before rushing in 6 song set, packed with both old and new hits, including a new song from the upcoming album, dedicated to this very event, called “Old School, Baby.” Now, I haven’t seen Trooper live before, but I’m told they’re actually a bit better then they were that evening, although they seem perfectly fine to me. Oh, apart from that little incident during one of the songs, when one of the generators failed, but they handled themselves masterfully. Bravo, Trooper!

Soon, sunset plunged and almost all of the 20,000+ strong crowd started to cheer and shout for their favorite band. A little past 21.00 it hit us. The opening Maiden video with the custom plane and raging fans in the airports, that they always play, alongside the ever-present opener “Transylvania” on the background. The show was seconds away from beginning, tension was in the air. Expectations were very high for me; I really didn’t know how to react, seeing how it was my first Maiden concert, after just seeing Metallica live one week before this. I was, indeed, nervous. As a quick note, the Bucharest concert is part of Iron Maiden Somewere Back In Time Tour 2008, the biggest, most spectacular tour the band have ever undertaken.

The setlist was quite predictable. Me and Andrei were going over a possible list of songs, that might eventually end up later in the night, and surprisingly or not they all got featured. The band really didn’t disappoint, and seeing how this was their first time in the country, it was fairly obvious they were gonna play only the hits. 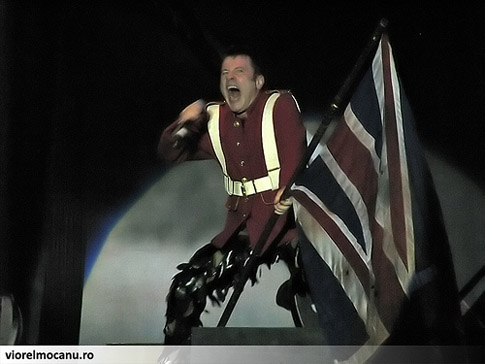 And so it was. In what was a bit over 2 hours of playing, Iron Maiden went through all their smashing hits, from their whole career. Kicking things off was” Aces High”, with a Bruce Dickinson apparently on steroids! The man’s a beast, really. He never stood one place for a second, always singing, always jumping around, dancing, always talking to the crowd, all of this at the age of 50 (btw happy birghtday, Bruce! He’s born on August 7th). A true showman, in all his right; soon followed the crowd favorite “2 Minutes to Midnight”. A short story about the band’s Jazz roots followed. “(Bruce) We found McBrain and he was the worst jazz drummer ever, and we asked him what he knows to do best and he said: ‘I like to break things…’ so then we were a band that breaks things! Ever since then we’ve been braking records all around the world and doing all kind of shit”.

Apparently they had a revelations… yeah, you’ve guess it they immediately started to perform “Revelations”. By this time Andrei was in ecstasy, having the time of his life, this being his favorite Maiden song and all. He was, like, on the floor, doing sorta of a bow and kissing the very ground he stood on and shared with the band. The dude’s a fucking nutcase, what can I say? 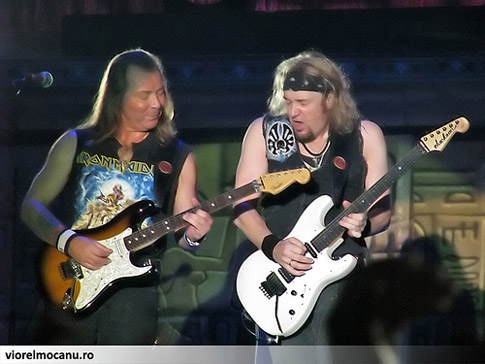 “Trooper,” and my personal favorite Maiden song, “Wasted Years,” were next, soon followed by the brilliant “Number of the Beast” and “Can I Play With Madness.” During all this time, preparations behind the scenes were high on top. The stage show was simply incredible, with a different set in almost every song. Bruce also regularly changed outfits, from a patriotic uniform coupled with a Union Jack flag, to a mayan-like mortuary mask, to the new famous cape. Lots and lots of energy present both on stage and off it, with tens of thousand singing along every verse and relentlessly cheering “Maiden, Maiden!” between every song.

Bruce hasn’t lost his charm with the gags either, having a lot of jokes around his sleeve, helping the rest of the band catch its breath a bit and also entertaining the audience. What’s worth mentioning is that Bruce doesn’t really use the same gags all the time, usually having different stuff to say to the audience on every show. He made a really good joke that night, referencing traditional romanian sausages and albatross beaks. Oh, ok, maybe the “Scream for me, Athens; Scream for me, Bucharest” stuff will always stay the same. But, who here can argue that’s not badass? 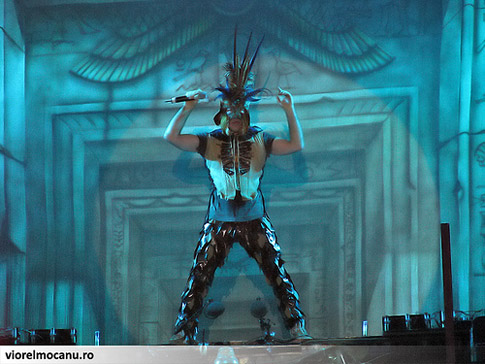 Bruce going all medieval on our asses.

On the 15 minutes long epic, “Rime Of The Ancient Mariner,” the stage was almost trembling, while a haunting silence laid before the whole stadium as the bridge progressed. “Powerslave” and “Run to the Hills” were simply incredible, amplified by the dynamic stage show. Edi, the band’s mascot for the last 30 years, came out of the “Egyptian Set” mausoleum as a huge raging mummy. And, then once again made his appearance as a 12 foot cyborg walking around the stage, poking on the guitarist and bassist.

“Fear of the dark” eventually came up, clearly the house favorite. A sudden darkness engulfed the whole stadium, as any sign of light had been extinguished. This was one of the most beautiful moments of the night, with the WHOLE stadium singing and humming along with Bruce’s intro. “I have a fobia that someone’s always there….Fear of the dark….” Magical!

The night came at a close with the 3 track encore, comprised of “Moonchild,” “The Clairvoyant” and the fantastic “Hollowed be Thy Name.” What can I say, I had the time of my life, and so did the thousands of other fellow Maiden fans around me.  Andrei told me after the show (he’s on vacation now, otherwise I’m sure he would’ve loved to review the show himself) to mention in the review, that “if you have the chance, go fucking see Iron Maiden live!” Amen to that, brother.

Full setlist and more pictures bellow. Many thanks to Viorel Mocanu for the wonderful photos. Check out his YouTube channel for videos from the show. 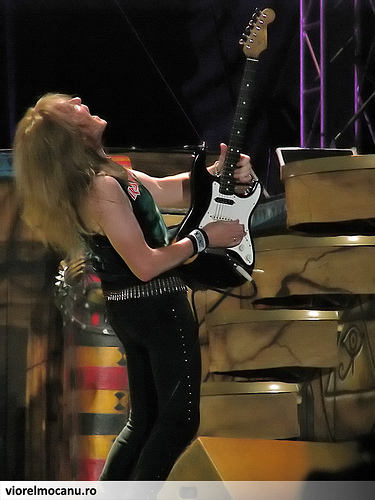 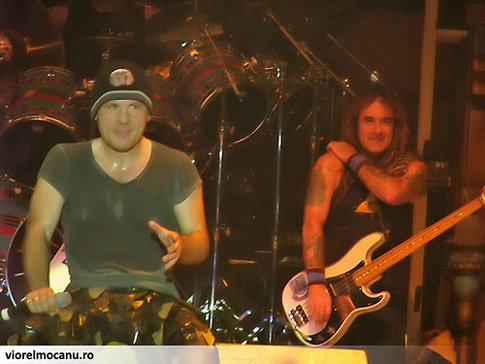 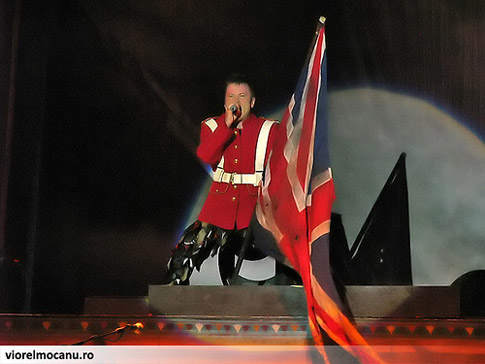 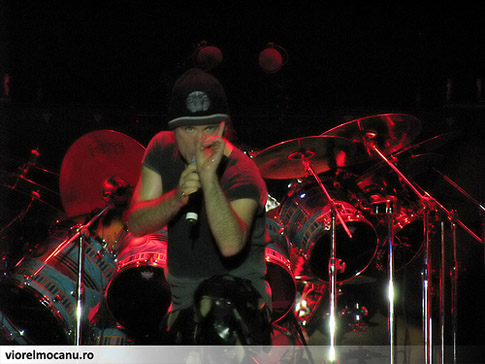 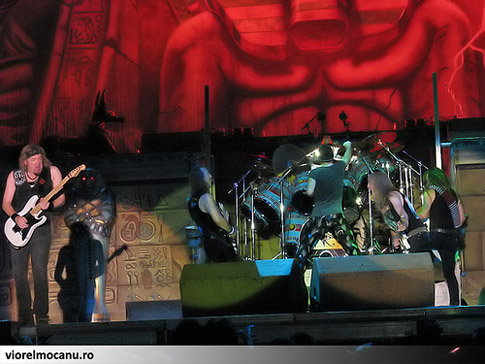 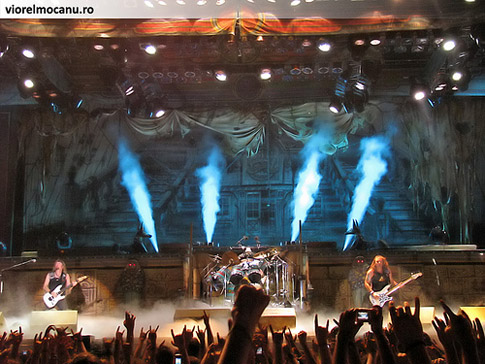 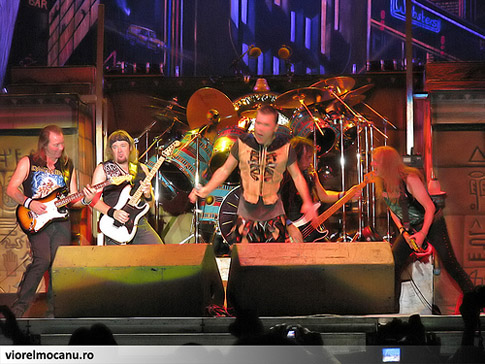 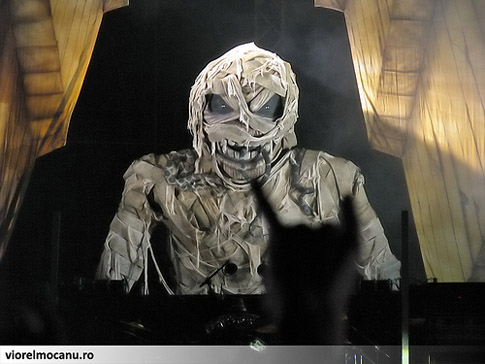 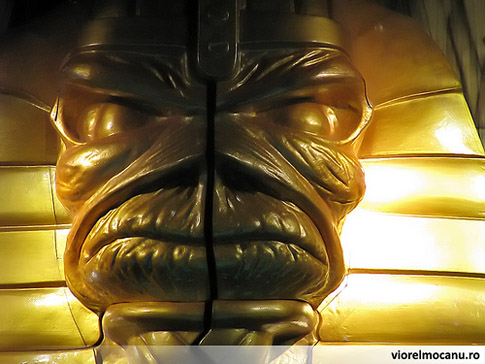 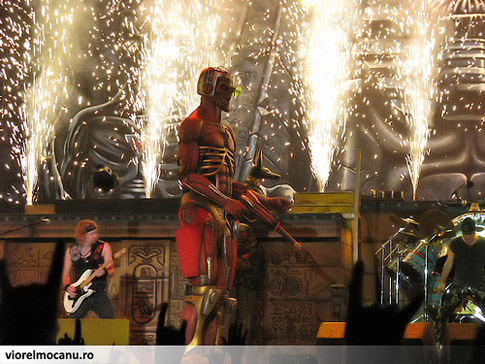