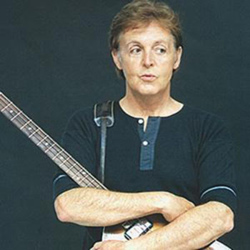 At his age and with his knowing of music it is hard not to listen to what he says. His words are often filled with wisdom and when he says that the inspiration for the title of his latest album, Memory Almost Full, came from a phrase he saw on his cellphone there is a story there. A good story is there.

“It seemed symbolic of our lives today,” the 65-year-old ex-Beatle said Monday. “Your messages are always full. And your mind is full. And it doesn’t matter if you’re my age or 20. I think that we all need to delete stuff every so often.”. He launched his 21st release earlier this year.

“The business was changing, everything was changing,” said McCartney, who left EMI Music, a unit of EMI Group PLC. “I started to think that the record companies didn’t know how to deal with it and they were getting boring and jaded.” “If you’re among 300 artists whose album is coming out, they have no time for you,” he said.

He is going to sing at the Olympia theater in the city of Paris. He sang there in 1964 over 40 years ago. Dressed casually in jeans and sneakers, McCartney gave the press a concert preview of “Let It Be” and “Lady Madonna,” singing and playing the piano.