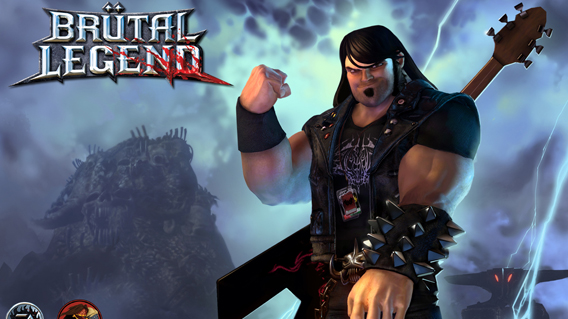 I used to be a huge gaming aficionado, but during these past few years something happened that dramatically diminished my interest for video games, something that to this day I’ve yet to figure out what it was. Who knows, maybe I grew up, although highly unlikely – trust me. I barely play a few times a year now, and even then a few hours with buds or at dorm LAN parties. However, this latest installment from Double Fine Productions, the kick ass Brütal Legend, seems so incredibly badass, so outrageously fun, that even I wouldn’t mind spending days at a time playing it. Hey, if you told me that it was me in the last sentence, I probably would have kicked you in the crotch and laughed out silly. That’s life to ya, I guess.

Back to Brutal Legend. The game was designed by iconic gaming mastermind Tim Schafer, the man we should all bow down to for bringing us timeless pieces such as Maniac Mansion, The Secret of Monkeys Island + Monkeys Island 2 or Full Throttle. The game is centered around Eddie Riggs, voiced by Jack Black (fantastic job!), a roadie who was transported to a fantasy world inspired by the artwork of heavy metal album covers. Eddie becomes the world’s savior, leading the down-trodden humans against a range of supernatural overlords using a battle axe, his Flying V guitar infused with magical powers, and a customizable hot rod.

Through out the game you’ll be entertain by a very diverse soundtrack of metal, 108 tracks to be more exact, played by the likes of Skid Row, Judas Priest, Black Sabbath, Manowar, Ozzy Osbourne, Motorhead, Megadeth, Slayer, Mastodon and many, many more. Anyway, this is a video game, and it’s best I leave you to some visuals. Check out the gameplay trailer, as well as the Brutal Legend intro video right bellow. Also, Jack Black is featured in some hilarious promo videos for the game here.